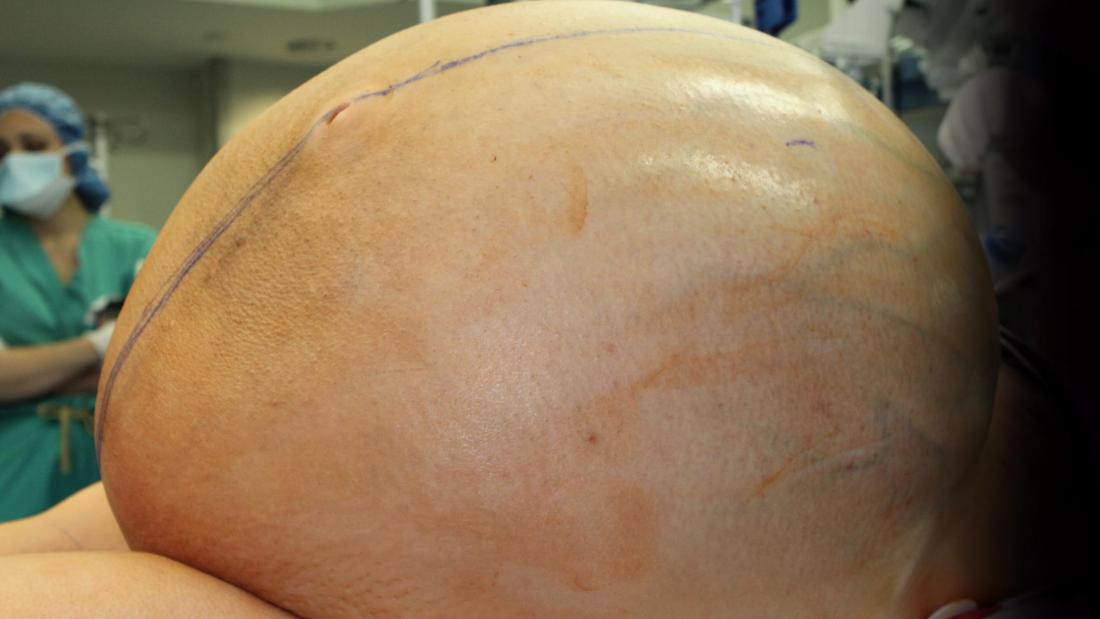 (CNN)A 132-pound ovarian tumor was removed from a 38-year-old Connecticut woman this year, according to two doctors involved in the case.

The patient, who wished to remain anonymous, reported that the tumor began growing at a rate of about 10 pounds per week in November. A medical team, including 12 surgeons, removed it in a five-hour procedure February 14 at Danbury Hospital in Connecticut, according to Dr. Vaagn Andikyan, a gynecologic oncologist for Western Connecticut Health Network and a lead surgeon on the case. 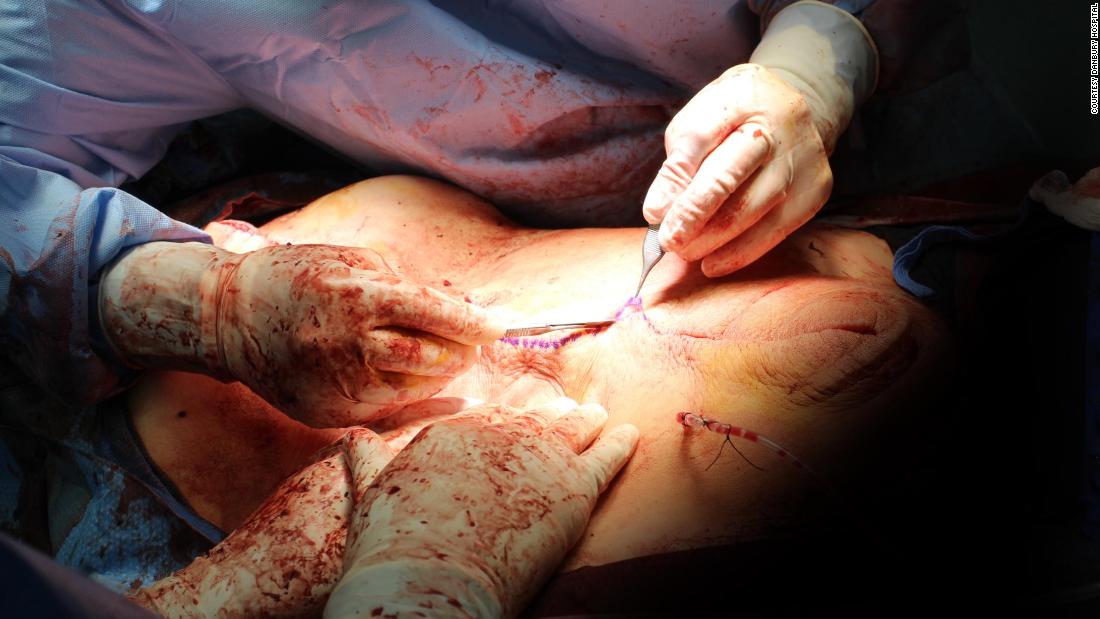 “During the surgery, we removed this gigantic tumor that originated from her left ovary. We removed her left ovary, her left (fallopian) tube, and we removed the affected peritoneal tissue that was adhering to the ovary,” Andikyan said.
The tumor originated in the epithelial cells lining the ovary and was “mucinous,” meaning it was filled with a gelatin-like substance produced by the tumor cells, according to Andikyan.
“Ovarian mucinous tumors tend to be big,” he said. “But tumors this big are exceedingly rare in the literature. It may be in the top 10 or 20 tumors of this size removed worldwide.” 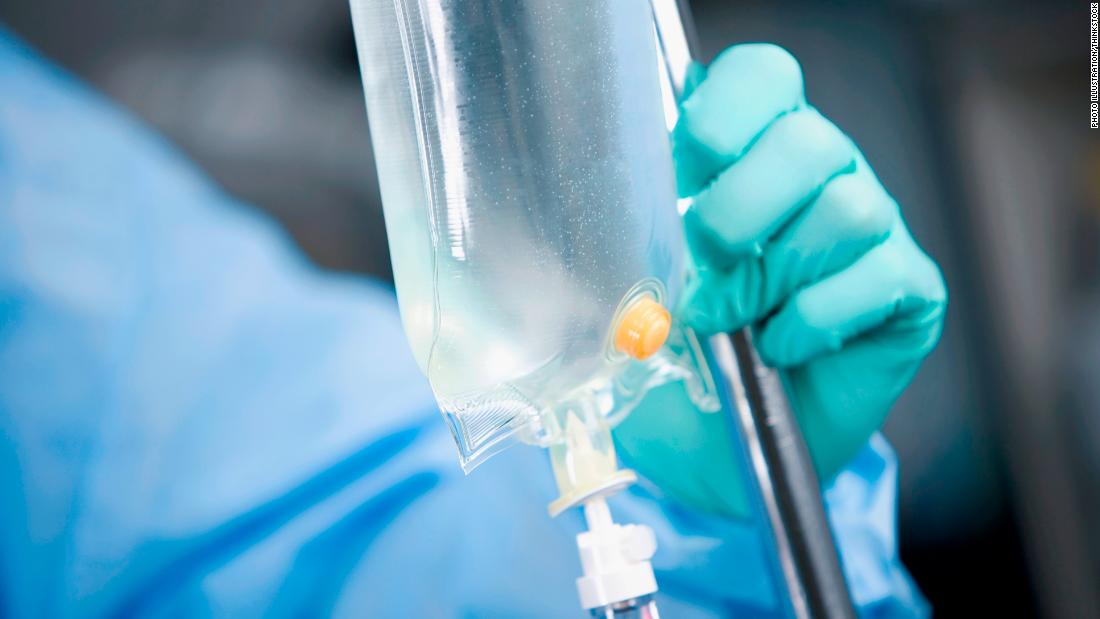 Although the tumor was technically benign, or noncancerous, and had not spread outside the ovary, it was compressing nearby blood vessels and was thereforea threat to the patient’s life, according to Dr. Linus Chuang, chairman of obstetrics and gynecology for Western Connecticut Health Network, who was also involved in the case.
“There were a lot of issues related to this very large tumor in the abdomen. She can’t eat, she can’t walk, and there are problems related to potential complications with this large mass compressing the venous system,” Chuang said. “She was at very high risk of developing blood clots because of compression of the blood flow.”
Mucinous ovarian tumors make up about 15% of all ovarian tumors and are notorious for being among the largest types of tumors known. Approximately 80% are benign, according to a 2013 study.
One of the largest tumors ever taken out of a human was a 303-pound ovarian tumor removed at Stanford Hospital in 1991, according to a 1994 report.
In the newly reported case, physicians removed the 132-pound tumor as well as 6 pounds of abdominal wall tissue and excess skin that had been stretched by the tumor. The doctors also had to reconstruct the patient’s abdomen, which had become disfigured due to the mass, according to Chuang.
“The abdomen was so pushed out that there were a lot of problems with the abdominal wall,” he said. “So Dr. Andikyan had to consult a plastic surgeon to do reconstructive surgery afterwards.” 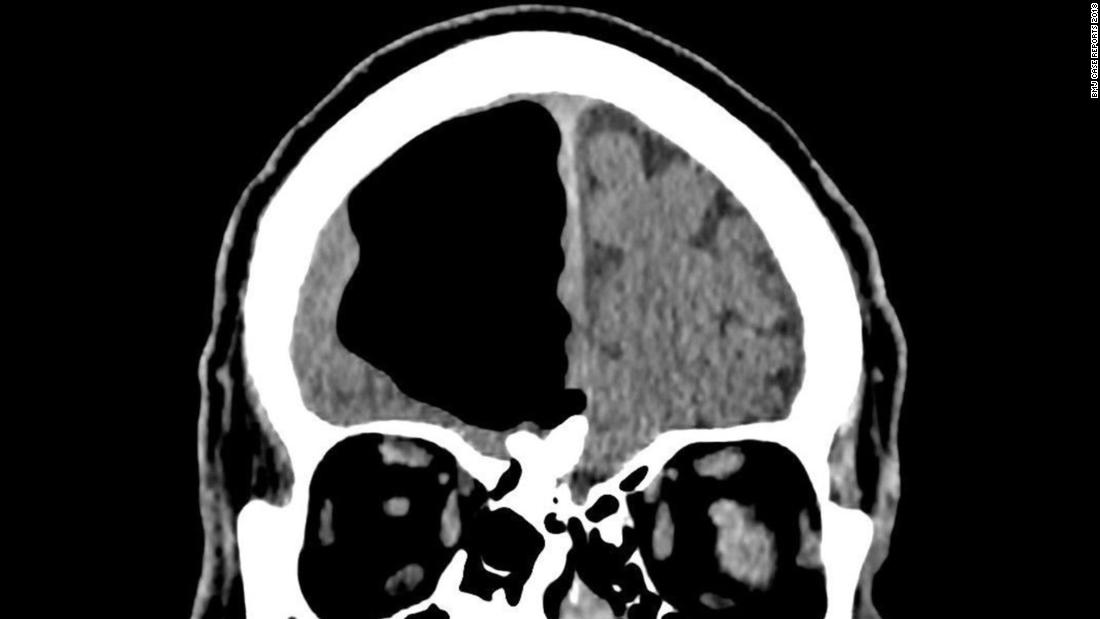 When the patient first met with the doctors at Danbury Hospital, she was severely malnourished and could not walk due to leg swelling and the weight of the tumor. She needed to use a wheelchair to get around, according to Andikyan.
“When I first walked into the examination room, I found this 38-year-old malnourished patient with a weight of 350 pounds and extensive tumor that was about 100 centimeters [39 inches] large. I saw fear in the patient’s eyes. She was so hopeless, because she had seen several other doctors, and they were unable to help her,” Andikyan said.
“Her legs were so swollen that she was unable to walk. I’ve seen leg swelling, but I’ve never seen leg swelling of this magnitude,” he added.
During the procedure, an anesthesiologist and cardiologist also worked to maintain the patient’s blood pressure, particularly when the tumor was lifted off of the patient’s major blood vessels.
“As soon as we starting removing the tumor, the blood pressure of the patient started dropping. So cardiology and the anesthesia team was able to adjust intraoperative management to support her heart and lungs to be able to continue with surgery,” Andikyan said.
The physicians were able to save the patient’s uterus and right ovary, meaning she can still bear children if she chooses, according to Andikyan.
“The good part about this story is, we were able to save her reproductive organs,” he said. “As of right now, she’s not interested in having more children, but she wanted to have the opportunity, and we were very careful to avoid damage to underlying reproductive organs.” 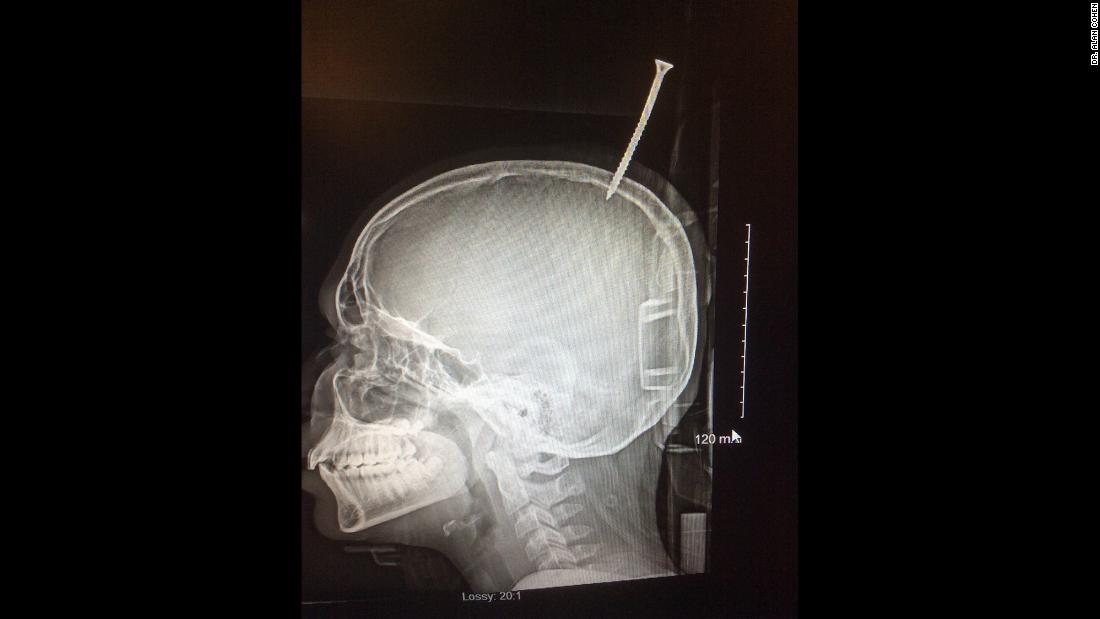 Now, almost three months since the surgery, the patient is recovering well and has returned to work as a teacher.
“We wanted to let people know, but we wanted to wait until the patient was really doing well in the postoperative period. And it’s been three months, and she’s really doing great,” Chuang said.
“Luckily, she did not require any additional treatment. She’s back to a normal life, she’s back to work, and when I saw her in my office, I saw smiles, I saw hope, and I saw a happy woman who is back to her normal life and her family,” Andikyan added.
The doctors also want to encourage women to see their physicians if they have any symptoms of an ovarian mass. Those may includeabdominal or pelvic pain, bloating, feeling the need to urinate often, and menstrual changes not related to menopause, according to the National Ovarian Cancer Coalition.
“If there’s any complaining about stomach fullness or discomfort or indigestion, it’s really important to bring it to the attention of your doctor or health care provider,” Chuang said.

Although ovarian tumors and cancer aren’t the most common cancer in women, Chuang had this warning: “It is a very deadly cancer if it’s not diagnosed in the early stage.”