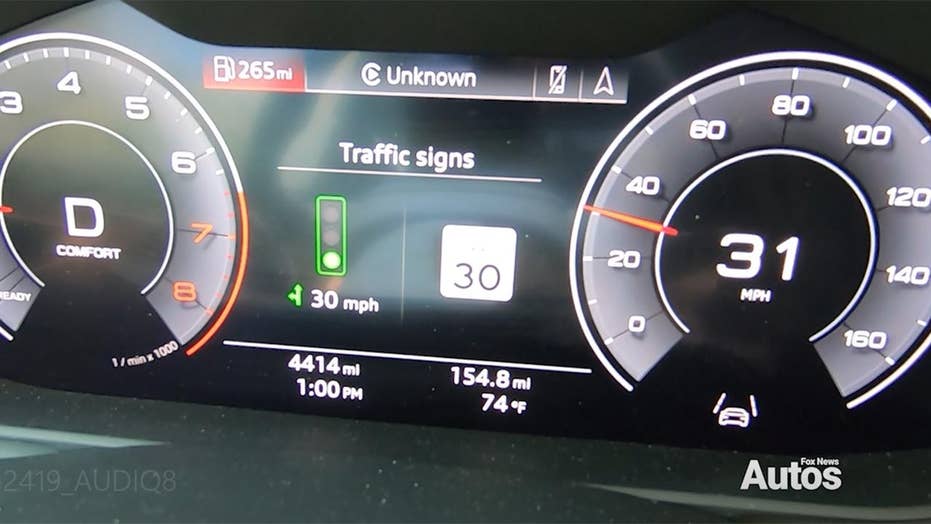 The Q8 is equipped with the latest version of Audi’s Traffic Light Information system (TLI), which taps into a city’s traffic control system and knows exactly when the lights are going to change. This data is useful in a few ways.

First, when you’re stopped at a red light, the car displays a countdown to when it will turn green, which takes away the sometimes frustrating uncertainty and allows you to make better use of your time than staring at the light in anticipation. The timer turns off when there are four seconds left to encourage you to reengage with the road ahead as the light goes green, so you don’t run into anything when you do.

Then, when you’re on the move and approaching a light that’s about to turn red, TLI calculates the exact speed you should be driving to make it … without breaking the law. If it doesn’t think you can get through safely, it warns you to start slowing down so you can stop in time, instead.

It takes some of the fun out of trying to time the lights yourself and cruise on through without getting held up, but can be more effective since it’s getting tipped-off. Along with reducing travel time, Audi says less stop and go driving should save some fuel, but you do need to pay for an Audi Connect Prime telematics system for it to work, which costs $499 for 18 months after a six-month free trial and comes with a suite of connected services.

TLI currently only works in certain areas in about a dozen cities, including Las Vegas, Houston and Orlando, through a partnership with Traffic Technology Services, but the network is growing. White Plains, New York, is one of the recent editions and where I took the Q8 for a spin to check it out.

It’s a small urban center, and there aren’t too many intersections there where it’s active yet, but the green light countdown worked nearly all of the time. Some studies suggest that if you know how long you have to wait for something it’s less irritating, even if the actual time is the same, which is one of the reasons similar countdown clocks are showing up at bus stops and subway stations. After an afternoon of sitting at countless lights with the system turned on and off I can see why. It does ease the anxiety.

As far as beating the lights in the first place is concerned, TLI is more of a mixed bag. White Plains doesn’t have any very long stretches of compatible lights to get a sense of the flow, and the other clueless cars without TLI tend to get in the way. The suggested speed was correct on the few times I got a clear run at a light that set it off, but the warning to slow down for an imminent red light came in handier more often. Sometimes nothing happens, which either means it didn’t think I needed any guidance, or it wasn’t working. There’s no way to know for sure.

Additional features are being developed, but what Audi is really providing is a sneak peek of the future of autonomous cars. For them to work at their best, they’ll need to be able to communicate with the infrastructure and each other. This is just one of the ways they’ll do it.

As Audi’s flagship SUV, the Q8 starts at $68,990 and there are plenty of other arguments to justify that price. Even though it’s very large and based on the three-row Audi Q7, a raked roof and wide fender styling inspired by the original Audi Quattro sports car hides its girth well. Along with excellent performance and a remarkably quiet and smooth car-like ride that can be enhanced with an available air suspension system, the five-passenger vehicle offers the kind of rear seat legroom that would embarrass most full-size sedans.

The interior is as meticulously trimmed as you’d expect an Audi’s to be and there’s plenty of new tech, including a dual-screen infotainment system with handwriting recognition to input destinations. Get frisky with an options list that includes plenty of active driver aids, upgraded leather upholstery and massaging seats, however, and you can push the sticker to well over $90,000.

You don’t have to spend that much to get TLI, though, because it’s available on nearly every 2019 Audi. Hopefully, you’ll be behind a few of them when you’re trying to use it.