It shouldn’t come as a surprise that people who make movies (good ones, anyway) love movies themselves. Many directors throw out allusions to the films that inspired their own work, but a few go so far that it evolves into a cinematic history-based obsessive disorder. And we’re not talking about stuff like Spider-Man having a signed Hulk autograph in his room. No, we mean films that exist in completely different legal and physical universes. Like how …

In Jurassic Park, Nedry’s Wardrobe Is Pulled From The Goonies

If you don’t remember anything about Jurassic Park beyond the dinosaurs, Nedry was the guy from Seinfeld who turned off the security system and then got killed in his attempt to steal dinosaur embryos for a rival company. He’s best remembered for having an aesthetic that screams “Likes to get drunk in a Margaritaville on a Wednesday morning.” 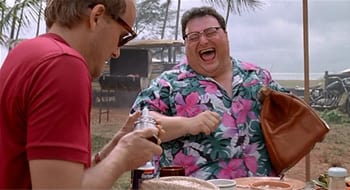 Universal Pictures“So this gets me free Cretaceous Land tickets for life, right?”

Turns out his choice of a gaudy Hawaiian shirt isn’t merely a bit of characterization. Some Reddit users have pointed out that it looks a lot like Chunk’s shirt from The Goonies: 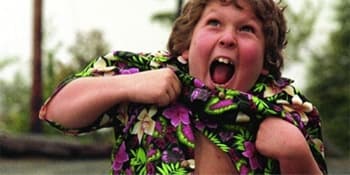 Warner Bros. PicturesWe’re not sure if we should be thankful or sad that we didn’t get a scene of Nedry doing the truffle shuffle.

But, you know, a Hawaiian shirt is a Hawaiian shirt. How many types of those are there? This is probably a coincidence. After all, he wears different clothes in other parts of the movie, like this windbreaker which holy crap is identical to Mouth’s: 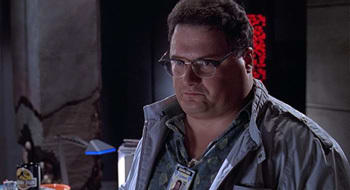 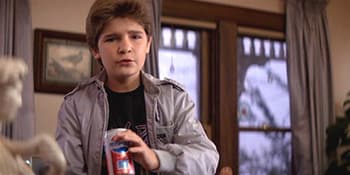 Warner Bros. PicturesNow we know that there’s probably dinosaur sperm or something in that Pepsi can.

And remember the childhood-scarring scene in which a dinosaur rips Nedry’s face off? It would have been even more traumatizing if you’d realized that he’s dressed like Mikey: 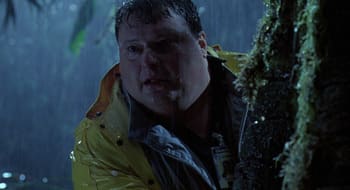 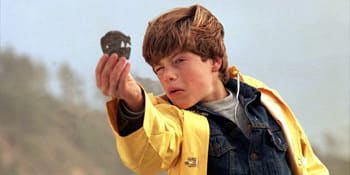 Warner Bros. PicturesBonus: After the attack, Nedry probably ended up looking like Sloth.

Steven Spielberg produced Goonies and directed Jurassic Park, so this parade of wardrobe references isn’t entirely out of thin air. It does, however, imply that three of the Goonies are going to grow up to be greedy jerks who get eaten alive, which is a bit of a downer.

The Last Jedi had a wealth of little WTF moments, from Luke milking some alien mammaries to Rey catching Kylo Ren after his daily chest-waxing session. At one point, we’re also treated to a weird shot set to booming music that looks like some mysterious new ship is descending into the story, only for the reveal that it’s an iron in a First Order space laundromat.

But that’s not just a random joke. As confirmed by director Rian Johnson, it’s also a nerdy reference to one of the earliest Star Wars parodies ever, one that was released only a year and a half after the original movie: Hardware Wars. Uh, ask your nerdy dad. 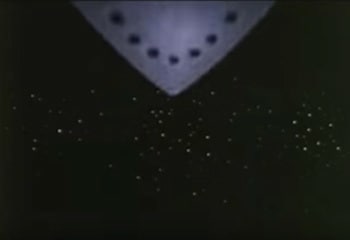 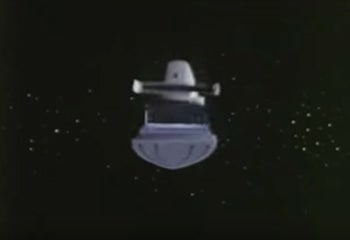 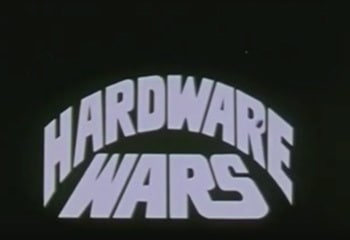 Ernie FosseliusIf he actually remembers this, give him a wedgie.

A 13-minute remake of Star Wars that used flashlights for lightsabers and irons, bottle openers, vacuum cleaners, watermelons, cassette players, and other stuff you’d find lying around your house for the ships and planets, Hardware Wars was a relative hit in its day. It apparently made almost a million freaking dollars after being created for $8,000, because Star Wars was the “more popular than Jesus” of the ’70s. But it’s largely dropped off the face of the Earth in the years since. Until now. We sincerely can’t wait for a scene with Stormtroopers literally combing the desert in the next movie.

Quentin Tarantino hasn’t seen a movie he can’t endlessly reference, but he’s usually riffing on obscure ’50s Italian art cinema or whatever. That changed with The Hateful Eight, which reenacts huge chunks of John Carpenter’s The Thing, one of the best-known sci-fi horror flicks of all time. While that may sound ridiculous at first, it makes sense if you think about it. Both movies are about a group of people holed up in an isolated location, cut off from civilization by snow, and trying to figure out who among them isn’t who they say they are. Heck, both start with similar shots of the lodge and the Antarctic research center:

Universal PicturesPlease imagine the entire plot of The Thing, but instead of a dog, it’s several horses.

Then, as someone approaches the location, characters inside are seen playing chess.

Universal PicturesIn both cases, it would be strip chess if it wasn’t for the cold.

Later, both groups of characters use a series of ropes to find their way between the main building and a nearby shack during a blizzard.

Universal PicturesWait a minute, isn’t this where the briefcase from Fargo is buried too?

Both movies also feature doors being boarded up, a whole lot of shooting, and a secret beneath the floor — where Channing Tatum is hiding in The Hateful Eight and the alien is tunneling in The Thing. More obviously, both movies end with only two characters still alive, knowing they’ll soon die and unsure whether they can trust each other, but finding peace in their final moments.

And then there’s the biggest The Thing reference in The Hateful Eight: Kurt Russell’s presence. On top of that, Tarantino also got the man who did The Thing‘s soundtrack to score his movie. In fact, a good chunk of The Hateful Eight‘s score was unused portions of The Thing‘s soundtrack. There’s also how The Thing is one of the few mainstream movies to be as ridiculously violent as a Tarantino flick, making it possible that Tarantino took it as a challenge.

The Incredibles Lifted A Scene From Die Hard With A Vengeance

In Die Hard 3: Oh Right, This One, John McClane co-stars with Samuel L. Jackson, whose character is called Zeus MF’ing Carver. The team that made The Incredibles definitely remembered it, at least. They remembered so well that one scene is almost an exact copy of a scene from Collect Our Paychecks With A Vengeance, seemingly only because Samuel L. Jackson is in both of them. Both start with a cop pointing a gun at Jackson, not realizing that he’s the good guy.

… and then, in a twist for anyone even vaguely familiar with Samuel L. Jackson’s career, he proceeds to do exactly that.

20th Century FoxIt’s lucky that Frozone put on the sock with the mouth-shaped hole in it this morning.

But then, double twist! The cop is incapacitated by a bomb blast and a freeze ray, respectively, and the movie continues. The Incredibles‘ cop even looks like the Die Hard actor:

20th Century FoxThe difference is that only one of their guns is voiced by John Ratzenberger (probably).

Even if you’ve never seen a Wes Anderson film, you’ve probably heard a lot about him, possibly over the course of a very tedious date. He’s famous for his quirky characters and distinct style, but one of his more obscure touches is cramming so many Peanuts references into his movies that you have to wonder if he doesn’t secretly want to direct a live-action Snoopy film. It started in Rushmore, in which main character Max has a barber for a dad, just like Charlie Brown. Max’s dad’s glasses are even modeled after the ones that Peanuts creator Charles Schulz wore. 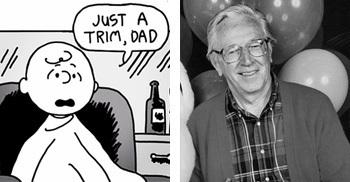 Rushmore also apes some of A Charlie Brown Christmas‘ shots. Here’s Max giving a speech on his school stage … 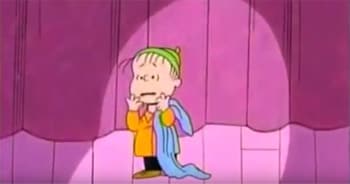 … and here he is carrying a sad little tree around. 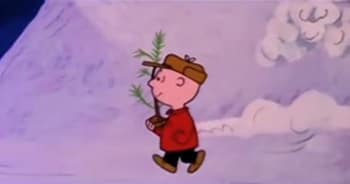 Lee Mendelson FilmsHis hat is much stupider than the cartoon one, though.

It’s also worth noting that both Charlie Brown and Max suffer from unrequited love while a willing suitor is right in front of them, although that’s also true of every other Peanuts character and a good chunk of cinematic history. Anyway, the parade of Peanuts references continues in The Royal Tenenbaums, in which the family gets a pet beagle and music from A Charlie Brown Christmas is used for the benefit of slower viewers.

Touchstone PicturesThat “thud” you hear in this scene is a little yellow bird crashing against the window.

Then there’s Moonrise Kingdom, which is about a little boy who’s in love with a redheaded girl. If that’s not specific enough for you, check out how the two girls dress: 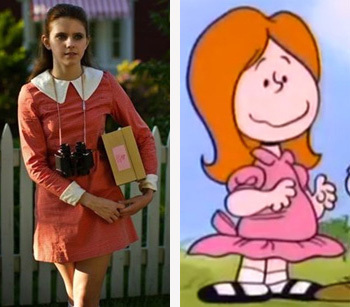 At one point, the boy declares “Rats!” exactly like Charlie Brown is wont to do. He also happens to be a member of Edward Norton’s Khaki Scouts, which resemble Snoopy’s Beagle Scouts. Note the hats of the troop leaders and their charges. Plus, Edward Norton is basically the Snoopy of actors, right? 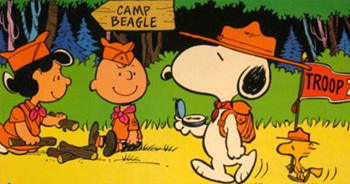 Charles M. SchulzBoth come off as smug dicks, but you suspect that they kinda earned it.

The only way that Anderson deviates from Peanuts is in his propensity for brutally killing pets in his films. Wes, do you have some Peanuts-related childhood issues that you need to talk out? We’re here for you.

See if you can find all the hidden details on our Facebook page. (There aren’t any, but you should follow anyway.)