8 Baffling Poop-Themed Toys Kids Are Lining Up To Buy

Maybe it’s due to the popularity of the poop emoji, or maybe it’s a trend that is somehow too intellectual for me to grasp, but today’s kids are into toy turds in a big way. I’m not speaking figuratively here. Right now, shelves are packed with products like …

Look at this shit:

Mattel is pretty much the biggest name in the toy industry. It’s a Fortune 500 company with revenue north of $5 billion, creating stuff like Barbies and Polly Pocket. And now they can add “game wherein a literal log of shit hits you in the face” to their list of winners. That one’s sure to make every little coprophiliac in your life froth at the mouth.

Here’s how the game works: You jam the rictus-grinned sewer pickle into the tank of a small toilet. You roll the die and then, as directed by the number, wrap your mitts around the comically small plunger and proceed to frantically pump the thing in a game of Russian Ass Roulette. If you’re lucky, your plunges go off without a hitch. But if you’re not, you will release the terrible turd Kraken that slumbers in the tank and send that Dysentery Howitzer rocketing into the sky.

This game has been featured in articles across the journalistic spectrum, from CNBC to USAToday to U.S. News and World Report. And why not? Someone spent time and money developing it for your children to enjoy. This is where are as a society. This is all we should be talking about.

If you have electricity, you’ve seen the Poop Emoji. It’s so popular that Sir Patrick Stewart voiced it in a movie for reasons philosophers will debate later in human history. For now, it’s ubiquitous, the most famous of all emojis. And now it’s also fully feminist: 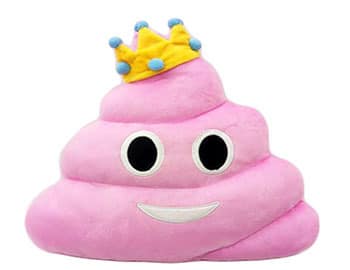 That sentient girl poop is but one example. There is an abundance of princess and queen poops on the market — which means they’re pink, if that wasn’t immediately apparent to you. That one has over 300 reviews on Amazon. Over 300 people got a stuffed pink shit and were so moved by its quality, or so distraught by the lack thereof, that they had to tell the world.

There are purple queen poops, vanilla-scented sprinkle poops, rhinestone poops, rainbow poops, and good ol’-fashioned American brown shits that are bedecked in pink bows so you know she’s still a lady under all that ass spackle. 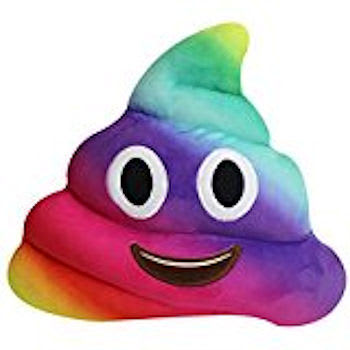 Here’s a girl shit with her shit daughter, who was presumably born after the mom shit fucked a dad shit: 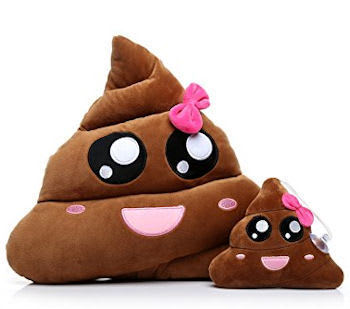 Amazon will drop over 2,000 results on you for the targeted search of “poop emoji,” because corporations around the world are rushing to get in on this bubble before it pops. At which point these toys will surely be replaced with something much, much worse.

Spin Master may not be as big as Hasbro or Mattel, but the Canadian company employs over 1,000 people worldwide and gave the world Bakugan, Air Hogs, Aquadoodle, and PAW Patrol. It has received 82 Toy of the Year nominations since 2002, more than any other toy maker in the world. When it comes to toys, they know what they’re doing, and what they’re doing now is taking Pikachu, drowning him in brown trout, and calling that “Flush Force.” 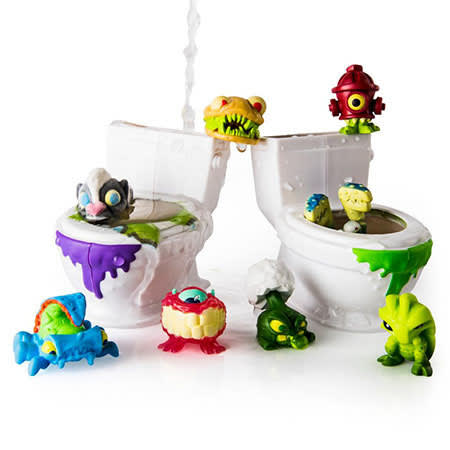 Flush Force really is basically Pokemon, but in a sewer. There’s an app to go with it, because of course there is, and 150 different toilet-themed little fellas like “Stink Eye” and “Hot Clog.” Hot Clog? Just savor that one for a moment. Savor the simple brilliance of that. A clogged toilet is meh, who cares. But apply heat. Make that sucker exothermic. Just simmering away down there for fun. That’s glorious. Gotta catch ’em all.

In the same ballpark bathroom as Flush Force are Poopeez, a series of small, squishy busted grumpies from Basic Fun, a company that has over 80 major licensing agreements with companies like Lucasfilm, Nintendo, and Hasbro.

The name game over at Camp Poopeez never hit the heights of “Hot Clog,” so you’re forced to deal with visionary creations like “Skid Mark,” “Franken-poop” and the I-can’t-quite-see-the-joke “Dutch Oveness.” It’s an elderly turd with a tiara and jewels. So you mean Duchess Oven, right? Like royalty, but a fart joke? What the hell is a Dutch Oveness? What an utter lack of creativity. Really makes you long for the days of “Hot Clog.”

Ask any kid, and they’ll tell you that their favorite quality of a really primo shit is how it sticks to things. The company Hog Wild knows this, and delivered on countless hopes and dreams with “Sticky the Poo,” a sticky shit that sticks and looks like shit. Listen, I don’t have a lot to describe here, so you’re going to be hearing this frequently.

Sticky is embedded like so many bits of corn all over the internet, on sites like Amazon, Vat19, and my personal favorite, Scholar’s Choice — a site designed to market educational toys for kids so parents don’t have to worry about all that frivolous junk at most stores. Sticky the Poo is scholarly, right? Teaches kids about viscosity and density and such. The site praises it as a good choice for teaching your child gross motor skills. Hey, emphasis on the “gross,” am I right? Ahh, poop humor. May you forever be.

Amazon has opted to make Sticky the Poo an “Amazon’s Choice” product, which means it’s recommended as a highly rated, well-priced product. You have to take Amazon’s word for this, because I defy anyone to explain what the appropriate price point is for “shit that sticks to things.”

Oh, yeah, it’s another “Try to avoid having human waste products flung at your face!” game. It’s a whole genre. Hasbro’s Toilet Trouble is like a plastic middle school bully that you can gift to your children. For this, you simply spin the toilet paper roll and flush the toilet. The unlucky will then have the toilet belch forth a stagnant spray of fun right into their faces, teaching them once and for all that the mirth of others is entirely dependent on them getting a snootful of tepid splashback. 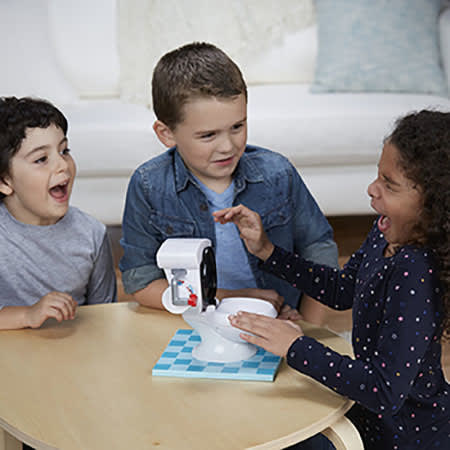 The popularity of Toilet Trouble is staggering. Over 80 reviews at Walmart, 200 at Toys R Us, a ball-chilling 400 at Amazon, and you better believe they’re all from people almost universally stoked by their experience of getting hosed down by the crapper. You know what passes for a negative review of this game? “Did not shoot toilet water in my face.” That’s the chief complaint. “I wanted a septic system face bath and this thing didn’t deliver, what the fuck?”

Don’t Step In It

If you have dogs, or a super lazy dad, you’ve experienced a solid footblast of shit in your day. No one likes to step in shit. Now, what’s the basis of every good board game you can think of? Doing something you absolutely hate, if Monopoly is any indication. So it must have been a no-brainer for Hasbro to come up with this clever contraption, which asks you to try to avoid stepping in shit. That’s the whoooole game.

But don’t worry, they made it more reasonable by giving you a blindfold, so it’s fun now.

Here’s part of the description from Amazon:

Imagine being at a point in your life where you’re dodging poop solo for fun. That’s only a few licks of lead paint away from dancing with your cat by candlelight. And because it’s Hasbro, this game is everywhere — Amazon, Walmart, Target, Toys R Us, pretty much any place you can think of that sells games. Is it, in fact, harder to avoid than stepping in a pile of shit?

POOP: The Game is a game in which you have to be the first to get rid of all your cards whilst avoiding clogging the toilet. It’s like a smellier version of UNO. Many of the cards feature cartoon pictures of turds bedazzled with corn nuggets. Because corn is hard to digest, you see, and will often stud your shit like diamonds in a tiara. This is educational, please take notes. 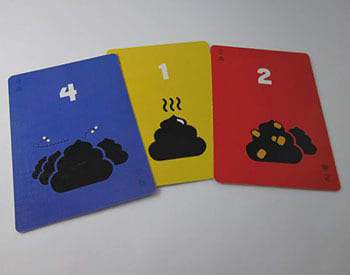 Boardgamegeek.com has over 200 ratings for POOP, which was born from a Kickstarter campaign that nearly 700 people backed in 2014. Now you can buy it at Target and Amazon, where it has a solid four-star rating after over 400 reviews. At this point, it’s kind of weird that you’re not playing it right now.

When you’re trying to come up with a tagline for a poop-themed game, you want to pen something more inspired than “This game is shit,” because maybe someone will misunderstand. The Poopyhead game — not to be confused with the Doody Head game — offers up “The game where number 2 always wins.” Get it? Number two? That’s a shit euphemism inside a gaming pun! Shitception! 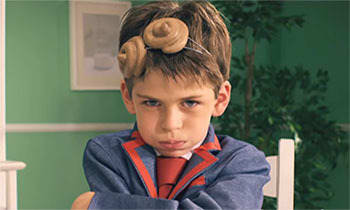 Both Poopyhead and Doody Head ask you to hang a grogan right on your melon so others in the room can experience some solid jollity at your expense. In Poopyhead, you have to get rid of all the cards in your hand first, and if you fail, a crown of rubber ass biscuit for you, good sir. In Doody Head, someone just throws Velcro shits at you. Both games have hundreds of reviews, and neither one really does much to answer the question of why, exactly, a shit on your head is such rollicking good fun. But if we’ve learned nothing else from the proliferation of dung-themed toys, it’s that there is clearly a zeitgeist here. We live in shitful times. 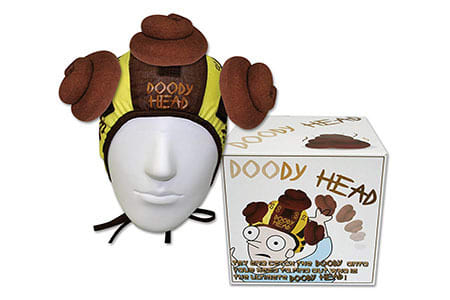 Or, you know, kids think poop is funny.

Come on, you know you want that ridiculous poop emoji plush displayed prominently in your room. Go for it.

For more bizarre toys, check out The 13 Most Unintentionally Disturbing Children’s Toys and 27 Famous Childhood Toys That Are Terrifying in Retrospect.