Amazon.com Inc. narrowed the field of cities for its proposed new headquarters to 20, with New York, Boston, Chicago, Miami and Toronto among the contenders.

Seattle-based Amazon solicited proposals in September for its second corporate seat, a project that’s expected to cost more than $5 billion and create 50,000 high-paying jobs over the next 10 to 15 years. The company received proposals from 238 locations, including from smaller markets like Tulsa, Oklahoma, and Memphis, Tennessee. The retailer plans to make a decision this year and will continue discussions with the finalists, it said in a statement Thursday. 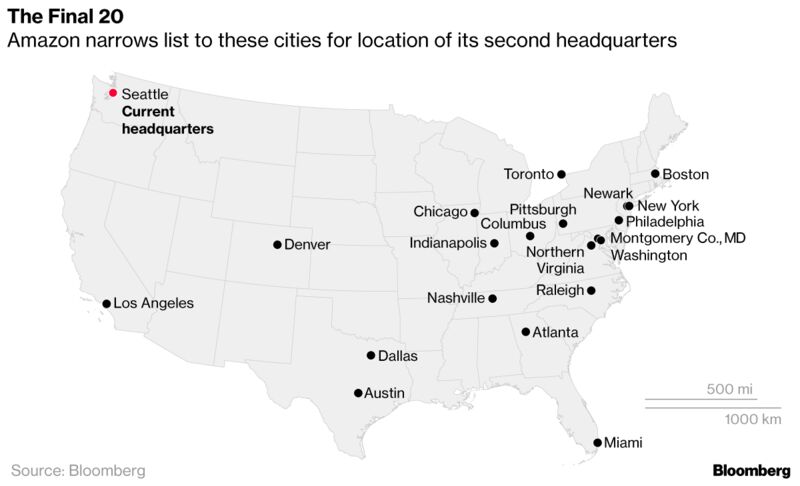 Amazon’s Great HQ2 Search ignited a reality TV-style competition among governors, mayors and bureaucrats across the U.S. and Canada. Civic boosters didn’t let long odds of success deter them, and the public relations stunts were legion. Birmingham, Alabama, erected a massive Amazon shipping box outside a new hip food hall to announce the city’s bid. The city council in Stonecrest, Georgia, voted to let the ecommerce giant form its own City of Amazon.

The company said it created a shortlist because it was difficult engaging with so many applicants, but winnowing competitors down to a chosen few is a staple of reality TV — and sparked yet more publicity.

The spectacle is also good optics for Amazon in the age of Trump. The U.S. President and Amazon Chief Executive Officer Jeff Bezos have publicly sparred over sales taxes and jobs, but a commitment to spend $5 billion and create 50,000 high paying positions fits into Trump’s call for companies to manufacture and hire American. (Unless, of course, Toronto wins the bid.)

For more on Amazon, check out the   podcast:

Earlier this week Apple Inc. also announced plans for a second corporate campus somewhere in the U.S. and said it would add another 20,000 employees. The company also said it plans about $30 billion in capital expenditures over the next five years.

Whatever city gets chosen will be transformed by Amazon, which has already changed the character of its native Seattle, setting in motion a building boom and rising rents. High paying tech jobs can permanently transform a region and raise the political prospects of the leader who helped seal the deal.

Amazon has said its preferences for the site include a metropolitan location with a population of more than 1 million, mass transit, proximity to an international flight hub and the potential to retain and attract technical talent.

The list reveals little in terms of geographic preferences, with finalists on both coasts and the heartland.

“Getting from 238 to 20 was very tough – all the proposals showed tremendous enthusiasm and creativity,” Holly Sullivan, of Amazon Public Policy, said in a statement. “Through this process we learned about many new communities across North America that we will consider as locations for future infrastructure investment and job creation.”