It’s been almost four months since the royal wedding, and I’ll be honest, I miss it. From approximately February through May, a solid 50% of my mental energy was devoted to Meghan Markle, and I was loving every scrap of news about her and her crazy family. Well, Meghan has settled nicely into her new life as the Duchess of Sussex, but her American family is no less batsh*t. In case you haven’t been keeping up with the Markles (E! Network, please get on this), here’s your much-needed update on what Samantha and Thomas have been up to lately.

The first bit of major drama involves Meghan’s time on Suits. I’m still obsessed with the fact the the former star of a USA showis literally a princess, so sign me up. Recently, Wendell Pierce, who played Meghan’s dad on the show, publicly slammed Meghan’s real dad, Thomas Markle, for the negative things he’s said about Meghan. Basically, Thomas is a messy b*tch who lives for drama, even if it means throwing his daughter under the bus. Wendell, who actually seems like he would be a good dad, told The Daily Telegraph “If you love your daughter, just love your daughter. It’s not for public consumption.” Shots fired.

Lucky for us, the Markle family is way too desperate to just let something like this go. Samantha, Meghan’s half sister, hit back at Wendell Pierce on Twitter, saying that his advice is “like a television president telling the White House what to do.” Ooh, sick burn. In the past, this might have been a solid analogy, but at this point I would really kill for Robin Wright or Julia Louis-Dreyfus to get in there and take control. Claire Underwood is the only one who can save us now.

I’m also a big fan of the random quotation marks around “stop sucking” in the second tweet. Not only is Samantha Markle a crappy sister, but she apparently is not so hot at English grammar. I’m not even going to pretend to be surprised.

And, because one questionable White House metaphor is never enough, Samantha had to try another one. In some more unhinged tweets, Sammy Markle fully compared Meghan to Donald Trump:

“Trump said he ‘could shoot someone and still get votes’…The ‘ant line mentality’ is the same here. Stop being gullible. Smiles and waves are a smokescreen.”

What??? Everyone is entitled to their own opinions about Meghan Markle and whether she’s a nice girl or whatever, but this really seems like a stretch. Like, she’s a princess who just goes to charity events and looks pretty in tasteful dresses, not a political leader with worse judgment than drunk me at 3AM. I won’t pretend to know what goes down between Meghan and her family behind closed doors, but Samantha’s tweets are desperate AF.

The one good thing in all of this is that, apparently, Queen Elizabeth has been super supportive of Meghan during the drama with her family.  Understandably, Meghan is stressed about the situation, and at this point it’s unclear if it’s even worth reaching out to her dad. But an “Us Weekly Buckingham Palace source” (seriously, who are these people??) said “what may surprise some is just how supportive Her Majesty has been during the problems Meghan has faced with her family. Meghan is in a tough place, and the queen knows it’s completely out of Meghan’s hands. She has only sympathy for what’s been a difficult and distressing situation for her.” Wow, this seems like major growth, considering that a few hundred years ago, they probably would’ve just beheaded Meghan and started over.

The source says that Meghan is worried that if she did reach out to her father, he would just record their conversation and sell it to the press. This is obviously very cynical, but she’s not wrong. Thomas Markle has proven time and time again to be completely shameless when it comes to exploiting his daughter for fame, so he would definitely have TMZ listening on the phone in the next room.

My personal favorite piece in all of this drama is Samantha Markle’s reality TV debut that never actually happened. Way back in July, it was reported that she would be a contestant on the new season of Celebrity Big Brother in the UK. The new season was allegedly going to feature lots of stars that had been embroiled in controversy, and Sammy Markle seemed like a big get. My all-time fave Stormy Daniels was also set to appear. I was actually pretty excited to see them on the show, but then…they weren’t on it.

Two days after the season premiered, Samantha took to Twitter to clear things up (sort of): 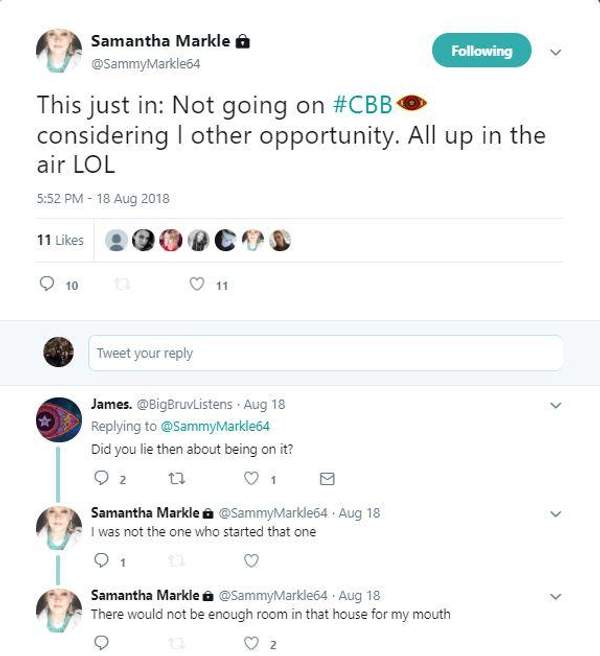 Again, grammar is not her strong suit. I do really love that someone called her out, considering that she had been tweeting about being on TV for the previous weeks. I’m really just dying to know what this “I other opportunity” is, because I still haven’t gotten sick of Samantha Markle content. Luckily, she’s apparently working on a memoir, with the working title The Diary of Princess Pushy’s Sister. This sounds like a children’s book that teaches you how to share, and I can’t f*cking wait to preorder it. God bless this mess of a family.