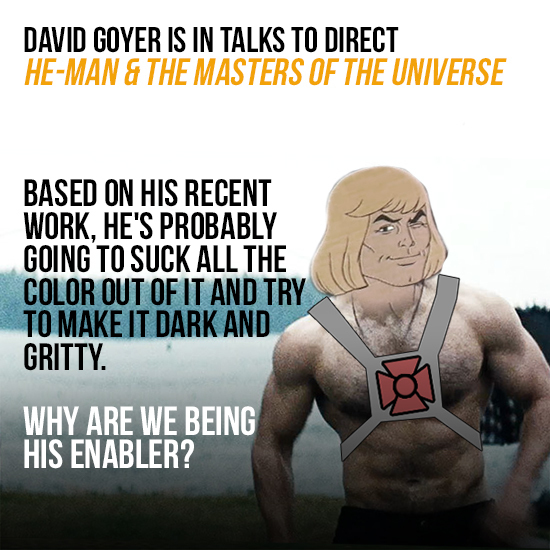 On the Mt. Rushmore of ’80s cartoons sit four heads: Optimus Prime, Cobra Commander, Lion-O, and He-Man. And because we delight in taking the pop culture that we love and seeing if we can fit boring flesh humans into it, we’ve adapted these landmarks into live-action films. Transformers is the most successful, with five movies and one upcoming spinoff. G.I. Joe was moderately successful, with two movies. As soon as we can convince Mark Wahlberg to wear the mane, I’m sure a Thundercats movie will be greenlit. And back in the ’80s, we got a Masters Of The Universe film, which most people remember for being the cinematic equivalent of watching a senior citizen fall down.

But the ’80s were the ’80s, and you can’t expect modern kids with their cellphones and Spotify accounts and communist manifestos to watch a grandpa movie from 1987. You gotta update it and make it relevant again. You gotta make the special effects be state of the art. And you gotta get David S. Goyer, God King of Adapting Shit from Your Childhood, to direct it.

This is basically my way of telling you that Goyer, esteemed director of Blade: Trinity, is in talks to direct a new Masters Of The Universe film. If you don’t know who Goyer is, he’s the guy who also wrote or co-wrote Dark City, the good first two Blade movies, and Batman Begins. Hey, Batman Begins is no slouch. That bad cop was all like “I swear to God!” and Batman was all like “SWEAR TO ME,” and that cop just shit falafel everywhere because he was so scared. Solid movie, Batman. You did good.

But most of Goyer’s recent work, which includes the screenplays for both Man Of Steel and Batman v. Superman, seems to indicate that he has hit his “We gotta make it dark and gritty and grueling and angsty” phase. It also hints that Masters Of The Universe might follow a same trend. Because when we first saw He-Man’s bare chest as he shouted at nothing in particular, our reaction was certainly, “Hmm. This would be better if he was frowning.”

I don’t think Goyer is a bad writer. A bad director, yes. His directing skill is equal to that of a cat or a lamp. But like I said, Dark City, Blade, Blade 2, and Batman Begins have great scripts. But I fear an adaptation of He-Man who wants to Game Of Thrones the whole thing instead of making it what it should be, which is a funny, exciting adventure film about Conan’s dumber brother. I don’t want to see Skeletor do actual evil stuff, like execute innocent people and take too long at the self-checkout line. I want to see him cackle and curse He-Man’s name. There are plenty of movies and TV shows that basically say, “You know how you like [insert fantasy brand here]? Well, what if it was … sad?” Masters Of The Universe doesn’t have to be another one of those.

Just let He-Man wave his sword and ride around on Battle Cat. I’m sure that there’s some kind of hidden darkness to that story. I’m just not sure I really give a shit about it.

Subscribe to our YouTube channel, and check out Why The Right Is So Dishonest About American History, and watch other videos you won’t see on the site!