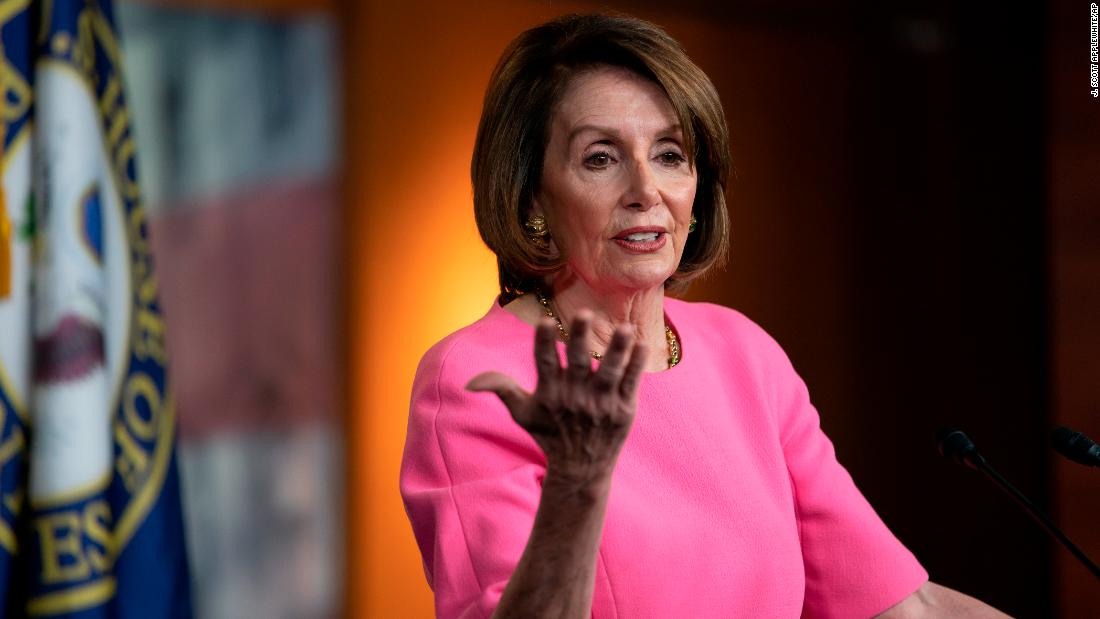 (CNN)A manipulated video being shared by some social media users to spread a false claim that House Speaker Nancy Pelosi slurred her words after meeting with President Donald Trump on Wednesday has been removed by YouTube, the company told CNN on Thursday.

The video, which shows Pelosi’s onstage comments at the Center for American Progress on Wednesday, has been slowed down, which makes her words seem slurred.
Pelosi’s spokesman declined to comment on the video when contacted by CNN. When asked about this video and other manipulated videos targeting Pelosi, her spokesman Drew Hamill told The Washington Post, which first reported the story, “We’re not going to comment on this sexist trash.”
Although the video has been removed by YouTube, copies of it were still circulating on Facebook and Twitter on Thursday evening.
“By my calculation, the altered video has been slowed by almost 75% introducing a significant distortion in her speech,” Hany Farid, a professor at UC Berkeley and expert in digital forensics and image analysis, told CNN.
A Facebook representative told CNN on Thursday that the Pelosi video had been referred to the company’s third-party fact checkers for review. On Friday, the company said one of its fact checkers had said the video was false.
Because of that determination, Facebook will downrank the video, meaning it will show up in fewer users’ News Feeds. The video will remain on the platform, however. Just one version of it had 2.5 million views on the platform as of Friday morning, according to Facebook’s metrics.
The representative explained that Facebook does not have a policy that stipulates information people publish on Facebook must be true. Among the steps Facebook takes to tackle the spread of false information is the one it is taking Friday, moving to make the video seen by fewer users, the representative said.
YouTube, which is owned by Google (GOOG), removed the video, its spokesperson told CNN.
“YouTube has clear policies that outline what content is not acceptable to post and we remove videos violating these policies when flagged to us. These videos violated our policies and have been removed,” the spokesperson said.
The video did not appear prominently in YouTube search and YouTube’s recommendations, the spokesperson said.
A Twitter spokesperson said the company had nothing to share about the video.
On Thursday night, Fox Business’ 7 p.m. ET show featured a segment in which panelists speculated about Pelosi’s health and competence on the basis of an edited clip of her recent speech. Trump subsequently tweeted the clip with a disparaging comment.
A short time later, Trump’s attorney Rudy Giuliani also tweeted — and then quickly deleted — a video raising similar questions about Pelosi’s fitness on the basis of an edited clip.
In January, US Director of National Intelligence Dan Coats warned Congress of a new artificial intelligence-based technology, known as deep fakes, that make realistic video manipulation possible.
“Adversaries and strategic competitors probably will attempt to use deep fakes or similar machine-learning technologies to create convincing — but false — image, audio, and video files to augment influence campaigns directed against the United States and our allies and partners,” Coats wrote in the DNI’s Worldwide Threat Assessment.
But Farid said the less sophisticated editing of the Pelosi video shows that peddlers of misinformation don’t need high tech.
“It is striking that such a simple manipulation can be so effective and believable, to some,” Farid told CNN. “While I think that deep-fake technology poses a real threat, this type of low-tech fake shows that there is a larger threat of misinformation campaigns — too many of us are willing to believe the worst in people that we disagree with.”
This story has been updated.
— CNN’s Brian Fung contributed reporting.