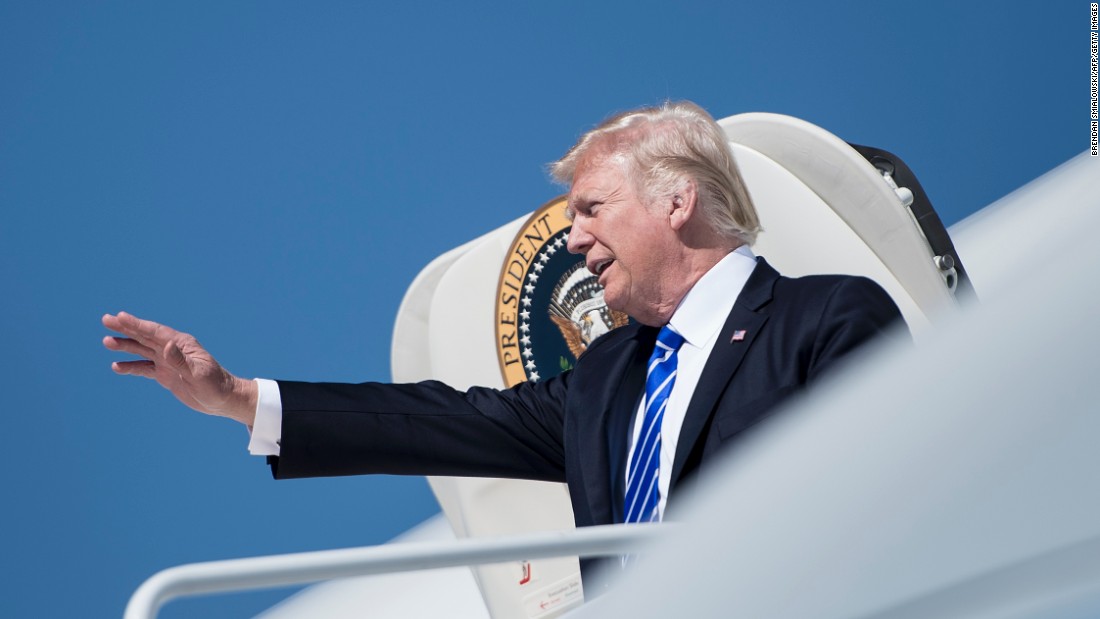 (CNN)Aboard Air Force One on the way back from visiting Florida to see the damage wreaked by Hurricane Irma, President Trump fielded questions from reporters. Someone asked about Trump’s meeting with South Carolina Sen. Tim Scott, the lone black Republican in the Senate and someone who had been deeply critical of Trump’s both-sides-do-it response to the white supremacist violence in Charlottesville, Virginia.

“We had a great meeting. Tim Scott’s been a friend of mine for a long time. I’ve been a supporter of his — I was one of his earliest supporters. We had a great talk yesterday. I think especially in light of the advent of Antifa, if you look at what’s going on there. You have some pretty bad dudes on the other side also, and essentially that’s what I said. Now, because of what’s happened since then with Antifa — you look at really what’s happened since Charlottesville, a lot of people are saying and people have actually written, ‘Gee, Trump might have a point.’ I said, ‘You’ve got some very bad people on the other side also,’ which is true. But we had a great conversation. And he also has legislation, which I actually like very much, the concept of which I support, to get people going into certain areas and building and constructing and putting people to work. I told him yesterday that’s a concept I can support very easily.”
Holy cow.
This should have been an absolute softball. “Yes, the Senator and I had a great meeting. We talked about ways to celebrate diversity — both within my administration and the country more broadly.” The end. Next question.
Trump didn’t do that. Instead he took the question and decided to use it as a launching pad to re-litigate the lowest moment of his presidency.
Consider these two quotes:
I’ll boil down those two quotes into four words: “I told you so.”
Here’s the thing: We knew/know that Trump believes he was right all along about Charlottesville — that equating white supremacists and neo-Nazis and those there to protest against them was, at root, a fair comparison. (BREAKING NEWS: It wasn’t!) That all of the responses to his remarks were just political correctness run amok — the same sort of stuff Trump ran against (and beat) in 2016.
Remember that at his campaign rally in Phoenix last month, Trump insisted he was right about Charlottesville and the threat posed by anti-fascists. “You know, they show up in the helmets and the black masks, and they’ve got clubs and they’ve got everything — Antifa!,” he said to much applause.
But, even if Trump believed all that, what would possibly compel him to take a VERY simple question about a meeting with Tim Scott and turn it into a series of quotes sure to re-stoke the debate over Charlottesville (and his response) after it finally appeared to be losing some of its heat?
The answer has to be this: Because he believes he was right then. And now. And he cannot deal with the fact that most people believe he screwed up in his initial response. He is obsessed with winning, with being right — even when it works directly against his political self-interest.
It’s amazing to watch. Truly.