Chief negotiator says no-deal scenario is not Brussels preferred option, but everyone needs to plan for it 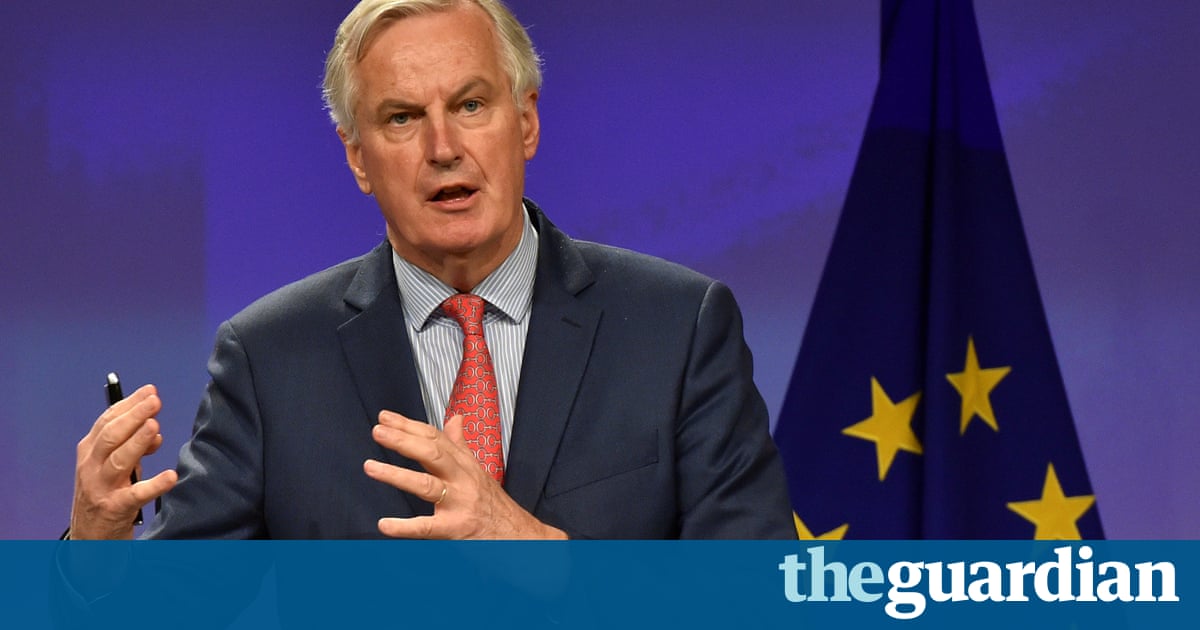 The EUs chief Brexit negotiator, Michel Barnier, has said the bloc is drawing up contingency plans for the possible collapse of Britains departure talks.

Barnier, who last week gave the UK a two-week deadline to provide greater clarity on the financial settlement it was prepared to offer as part of the divorce deal, told Frances Journal du Dimanche newspaper the failure of the talks was not his preferred option.

But its a possibility, he said. Everyone needs to plan for it, member states and businesses alike. We too are making technical preparations for it. On 29 March 2019, the United Kingdom will become a third country.

The remarks came as Theresa May faces increasing pressure at home, with Tory and Labour MPs warning she risks a Commons defeat over Brexit within weeks if she continues to deny parliament a meaningful vote on the final deal with the EU.

Michael Gove and Boris Johnson, who led the Brexit campaign but infamously split when Gove withdrew his support for Johnsons Tory leadership campaign to run himself, have also joined forces to complain in a leaked letter of insufficient energy on Brexit in some parts of government and insist any transition period must end in June 2021.

Barnier told the JDD it was vital that Britain increases its financial offer, thought to have been estimated by the EU at about 60bn (53bn), if talks are to move on from the divorce phase to future trade as the UK desperately wants.

Member states will decide at a summit on 14 and 15 December whether or not sufficient progress has been made on the core separation issues the divorce bill, the Irish border and citizens rights for negotiations to advance to the next stage.

We want to reach an agreement [with the UK] within the next 14 working days, Barnier said, so the summits draft conclusions to be circulated and approved in time. Today, we are not there. The rendezvous will be postponed if progress is not sufficient.

EU diplomats have said that if the 14-day deadline is not met, trade talks would be delayed until February or March next year. If it is, Barnier told the JDD, negotiations on a new treaty could start in January and would take at least two years to conclude.

Barnier warned that a collapse of the divorce talks would have consequences in multiple areas, from the capacity of British planes to land in Europe to that of dogs and cats to cross the Channel.

Without a deal on future trade, the EU and Britain would revert to World Trade Organisation (WTO) terms and trading relations like those we have with China.

The Spanish newspaper El Pais also reported on Sunday that Brussels was working on Brexit contingency plans, citing an internal document describing the formation of a Brexit preparedness group that has begun working in parallel with the blocs negotiating team.

The paper said the working group was secret because acknowledgement of the existence of a Plan B risked precipitating the eventuality it was designed to cope with. But the EU executive is already exploring the consequences of the worst scenario: a sudden Brexit, El Pais said.

The letter to May from Gove and Johnson leaked to the Mail on Sunday appears to make a veiled attack on the chancellor, Philip Hammond, who backed remaining in the EU and now wants a softer Brexit, for lacking sufficient energy in preparing for the UKs future outside the bloc.

The foreign and environment secretaries urged the prime minister to ensure members of her top team fall behind their Brexit plans by clarifying their minds and called for them to internalise the logic.

Marked For your and Gavins eyes only, a reference to the PMs chief of staff, Gavin Barwell, it states: We are profoundly worried that in some parts of government the current preparations are not proceeding with anything like sufficient energy.

We have heard it argued by some that we cannot start preparations on the basis of No Deal because that would undermine our obligation of sincere co-operation with the EU. If taken seriously, that would leave us over a barrel in 2021.

Appearing on BBC Ones The Andrew Marr Show, Gove said he did not believe it was time to walk away from the talks and he would not seek to stop May if she decided to hand over extra cash to Brussels to secure a good exit deal.

I wouldnt block the prime minister in doing what she believed was right, he said. May and Brexit secretary David Davis should be given the flexibility they need to secure a good deal, Gove said.

Speaking on Sunday with Niall Paterson on Sky News, Davis said it would be very expensive for the UK if it sought to extend negotiations by 12 months by pausing the article 50 process, adding it would require unanimity from the EU27 and create extra uncertainty for businesses.

He dismissed the suggestion that a no-deal scenario was more probable than its ever been before, reiterating this was not the governments aim, and said the UK would be aware if that was what was coming.

Davis said: If were at this point with no deal, well know its coming for a while and well take measures [to secure] a bare bones deal or a minimalist deal.