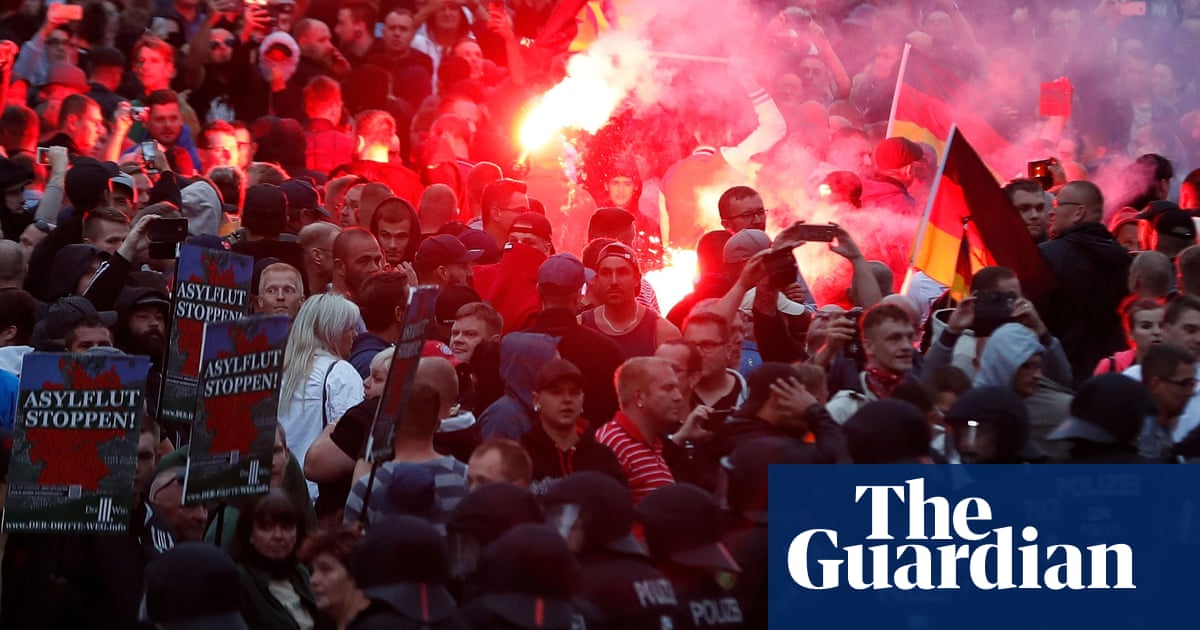 Hans-Georg Maaen said in an interview with the tabloid newspaper Bild that he had reason to believe deliberate misinformation had been spread.

I share the scepticism towards media reports of rightwing extremists chasing down foreigners in Chemnitz, he said. He had no evidence to suggest that the video of this alleged incident circulating online is authentic. He did not identify the video in question.

Officers from his Office for the Protection of the Constitution (BfV) are reported to be trawling through evidence of the events in Chemnitz in late August, including hundreds of hours of film footage.

Far-right extremist groups rallied in Chemnitz after the fatal stabbing of a local man, allegedly by two refugees who are in police custody. The groups were joined by thousands of local people. Numerous participants shouted anti-foreigner slogans and held up their arms in illegal Nazi salutes.

Non-German citizens, police and reporters were among those injured in the ensuing clashes.

We have seen pictures, we have heard witnesses, we have seen how people openly displayed the Hitler salute on the streets, Thomas Oppermann, a vice-president of the Bundestag, told German radio.

He said a group of Social Democrats, the party to which he belongs, were attacked by far-right hooligans during the protests. He had no understanding of Maaens remarks, and said the events in Chemnitz were something we cant accept on German streets.

The government said it had received no notification from Maaen about possible false information. Merkels spokesman, Steffen Seibert, said the chancellor and Maaen had not discussed the issue in the past few days.

The interior ministry said it had no further information and investigators in Saxony were still analysing video material.

On Wednesday, the premier of Saxony, Michael Kretschmer, told the regions parliament there had been no mob, no hunting of foreigners and no pogroms.

Kretschmer and Maaens comments directly contradict those of Merkel, who expressed her outrage at footage of the protests, which she said she had viewed herself and showed that people of foreign origin had been deliberately singled out for attack.

We have video footage showing that there was targeted harassment, that there was rioting, that there was hate on the streets, and that has no place under our rule of law, she said. Seibert also condemned the scenes, speaking of a hetzjagd, or hunting down of foreigners.

The highly unusual public dispute between Maaen and Merkel comes at a time when Germany is embroiled in a heated debate over immigration. The far-right group Pro Chemnitz was due to hold a rally and a concert on Friday under the slogan Stronger Together.

Anton Hofreiter, the head of the Green party, was one of several politicians to call on Maaen to provide evidence for his claims. If Mr Maaen sets out such claims, he must unequivocally prove them. Anything else would be irresponsible, he told the TAZ newspaper.

He said Maaens imprecise utterances left a clear impression that the spy chief was intent on downplaying the events in Chemnitz and trying to divert attention from the problems of the far right. This is a slap in the face of all those who were attacked, Hofreiter said.

The Dresden prosecutor generals office said it was investigating 120 alleged incidents of breaching the peace, assault and performing the Hitler salute during the two nights of protest in Chemnitz.

Katja Kipping, the leader of the far-left Die Linke party, said Maaen was unfit to remain in office, having turned from being a defender of the constitution to being a sympathiser of the AfD, referring to the anti-immigrant Alternative fr Deutschland party.

Alexander Dobrindt, a leading member of the Christian Social Union, said Maaen had simply been doing his job. Its his task to inform the public about the state of facts. To criticise him on the one hand and on the other, completely uncritically, to assume some videos from the internet are to be believed just like that is for certain a completely false move, he said.

It was reported earlier this week that Maaen, who has been in his role for six years, had met high-level AfD members several times, including allegedly to give them tips on how to avoid being put under surveillance by the BfV.

The interior ministry has described the meetings as against normal practice, according to the Sddeutsche Zeitung. The BfV responded by saying it held meetings with all political parties.

Maaen, whose post is non-partisan, surprised commentators with his outspoken remarks.

It is very unusual for someone in his role to wade into this politicised debate, said a political analyst who declined to be named given the sensitivity of the debate. Even if he was asked by the Bild for comment, he should restrain himself. The big question is what is motivating Maaen?

A hetzjadt is not a crime as such, and therefore not a term the domestic intelligence service would be expected to use.

Maaen has caused a stir in the past. During the 2013 revelations about mass surveillance, he agreed to transfer data collected by the domestic intelligence office to the National Security Agency in the US, and in 2016 he questioned whether Edward Snowden, who leaked the story, was working for Russian intelligence.

It is not the first time the BfV has faced scrutiny for its handling of high-profile far-right issues. In 2003, attempts to ban the far-right NPD party failed after high-level NPD functionaries were found to have worked as undercover informants for the BfV.

The BfV was criticised for its failure to chase important leads in the investigation of an National Socialist Underground neo-Nazi cell that murdered 10 people, mostly immigrants, between 2000 and 2007. It has also been accused of failing to pursue evidence that might have prevented the Berlin Christmas market terrorist attack in 2016.