Global currency traders and compliance officers who monitor them were put on high alert after a New York jury convicted a former HSBC Holdings Plc executive of fraud for front-running a large client order.

The verdict is a victory for U.S. prosecutors in their first attempt to hold individuals accountable since a global currency-rigging probe that led to banks paying more than $10 billion in penalties. Mark Johnson faces a maximum sentence of 20 years in prison, although he’s likely to get much less.

Traders will almost certainly come under pressure to avoid conduct that could be seen as harming their clients and profiting unfairly at their expense, said Mayra Rodriguez Valladares, a former foreign-exchange analyst for the Federal Reserve Bank of New York.

"Front-running is a crime," she said. "This should be a lesson to senior executives that they should invest in more training of ethics for traders and more in systems to detect irregularities."

The verdict is likely to echo worldwide. Although Johnson, HSBC’s global head of foreign exchange in 2011, was in New York at the time of the transaction, the trade was executed primarily in London, where Johnson’s co-defendant, Stuart Scott, was overseeing it. Scott, the bank’s former head of currency trading in Europe, remains in the U.K. as he fights extradition to the U.S.

Ex-HSBC Currency Trader Is Convicted of Fraud for Front-Running

"This conviction will embolden the U.S. in other cases," said Peter Henning, a law professor at Wayne State University in Detroit. "The U.S. authorities have shown they’re able to police global markets.”

"At its very essence,” he added, “this was a theft case.”

Market participants are bracing for the crackdown, said Daniel Mantini, a former currency trader at Salomon Smith Barney and Bear Stearns who left the industry in 2012.

“Everybody I know is now scared of their own shadows,” said Mantini, who’s now a author based in Branchville, New Jersey. “He was just a guy doing his job, trying to make some money off of a big order. This travesty of justice makes me glad I am out of the game.” 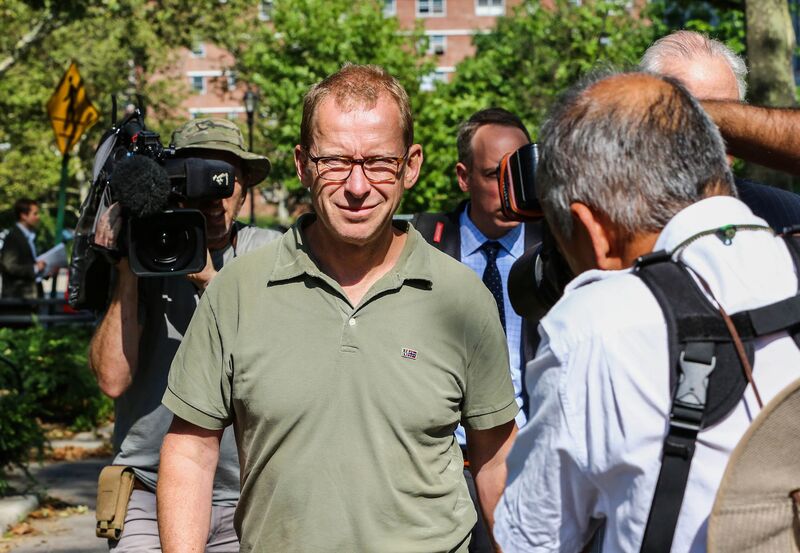 Johnson, the first banker to go on trial following the investigation over foreign-exchange trading, was convicted of defrauding Cairn Energy Plc in what prosecutors said was a clear case of front-running the company’s $3.5 billion order. London-based HSBC wasn’t accused of wrongdoing, but the bank has been under investigation over currency trading and is in talks with the Justice Department and U.S. regulators to resolve the matters, according to a July 31 regulatory filing. Rob Sherman, a spokesman for HSBC, declined to comment.

A jury found Johnson guilty on Monday on nine of 10 fraud and conspiracy counts after a month-long trial in Brooklyn, New York. He plans to appeal.

‘I Think We Got Away With It:’ Listen to HSBC Trader Phone Calls

According to prosecutors, Johnson and Scott were among 11 currency traders feverishly buying pounds just before the Cairn transaction. The traders in New York and London jumped ahead, driving up the price of the pound to its highest in two days on Dec. 7, 2011, minutes before the 3 p.m. deal, according to the U.S. Prosecutors said the other traders were tipped by Johnson.

Johnson spent three days on the witness stand in his own defense, but it was his own words from six years ago that formed the most compelling parts of the prosecution’s case. The government played recordings of 29 phone calls, including one in which he said, “I think we got away with it." Jurors asked to re-hear several of these calls before delivering their verdict.

The only charge on which he wasn’t convicted was linked to a 50-second recording in which Johnson excitedly said, "Ohhhhh, f—ing Christmas,’’ after he learned the Cairn Energy order would go ahead as planned. A juror who declined to provide his name said the call was too brief to convict Johnson on that count.

Acting U.S. Attorney Bridget M. Rohde said currency traders and others in the financial markets should know they are being watched. The government will “vigorously investigate and prosecute those who would so abuse their client relationships,” Rohde said after the verdict.

In HSBC Currency Trade Charts, U.S. Offers Its Theory of a Crime

Rodriguez Valladares said that message is certain to reach those in the foreign-exchange market.

“When these cases get a conviction — or even if they don’t end in conviction but they get a huge amount of airtime — basically compliance tends to round people up into relevant meetings and say, ‘All right, what are our controls like,’ and ‘Let me remind you of the rules,”’ she said. "You’re going to see a lot more focus from the compliance professionals at these firms and higher up to really clamp down.”

Well before the verdict, industry participants and central bankers spent two years creating the FX Global Code, published in May, part of a cleanup effort that followed the rigging scandal. Simon Potter, head of the markets group at the New York Fed, said at an event last month in Chicago that while it isn’t possible to stop all bad behavior, government officials are watching markets closely to see whether the code is helping.

“What you’d like to see is the size of scandal, the stuff that’s hidden, is much smaller,’’ he said. “And that internally within the firm, people would start asking questions.’’

Javier Paz, a senior analyst at consultancy Aite Group, said traders now have added reason not to unfairly profit at their clients’ expense in the lightly regulated market.

"It’s not a bad thing for foreign-exchange executions, even yard-sized trades, to become more boring and auditable," he said, referring to transactions worth $1 billion or more.

“The industry has moved to a better place since 2011,’’ added Guy Debelle, deputy governor of the Reserve Bank of Australia, who led policymakers’ work on the FX Global Code. ‘‘We’ve provided more clarity around what is or is not appropriate,” including guidance on pre-hedging, or the purchase or sale of currencies in advance of client transactions, he said by phone.