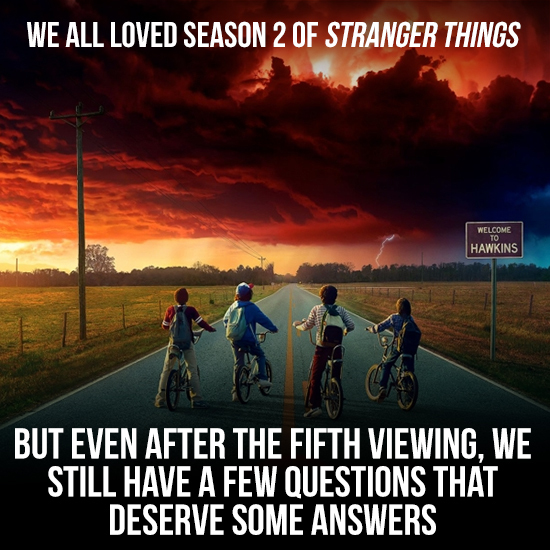 If you’re like me, you spent the weekend devouring Stranger Things 2. Your parents called, your children wailed for you in the streets, and your pets fought off multiple bears, but you heard none of this, as you were too engrossed in watching the Duffer brothers’ reelection campaign to be God Kings of Netflix. But I imagine that when you finished, you probably had a few questions lingering in the back of your mind. I know that I did, and so I think it’d be good for us to come together, sit down, and shout over each other in pure righteousness to get to the bottom of things.

WARNING: SPOILERS ARE AHEAD. IF YOU HAVEN’T WATCHED STRANGER THINGS 2, GET THE HECK OUT OF THIS ARTICLE. GO BACK TO HANGING OUT WITH YOUR JOCK FRIENDS.

Why Does Everyone Peel Out When Leaving Their Driveways?

Every car in Hawkins, Indiana leaves every driveway in a cloud of dirt, gravel, and fury. “I got to go to the store.” SKKUUUURRRRRT. Just drive normally. Save your tire treads. I don’t know how they teach driving courses in Hawkins, but there should be more than Section A: Peel The Fuck Out, and Section 2: Running Children Off The Road.

How Often Does Winona Ryder Scream “MY BOY”?

Someone on the internet needs to cut together a montage of Winona Ryder yelling “My boy!” It will last about as long as an episode of Stranger Things, but it will be worth it. Winona Ryder screams “My boy!” like it’s the only line on her action figure’s pull string.

We got #JusticeForBarb. She has been laid to rest, and everyone seemed to care about her. Great. But what’s in her coffin? Did they make a dummy Barb for her funeral like they made a dummy Will in Season 1? As we see from when Steve and Dustin are spreading it around, there seems to be a surplus of raw meat in Hawkins, so much so that two kids can afford 30 pounds of it. Is Barb’s coffin filled with ground beef? Is it a scarecrow made of burlap sack, straw, and copious hot dog?

Why Would Barb Be Hanging Out Near The Creepy Building, Anyway?

They cover up Barb’s death by saying that she was killed by a toxic leak, but where would she have been to have died that way? Creepin’ around the big science institute? She had to have been super near, otherwise other people would have been affected. “She died doing what she loved: hiking dangerously close to the headquarters of extremely secretive organizations.”

Bob got eaten. And unless some guys had to clean up a skeleton and mint-condition Sean Astin head, we assume that the baby demogorgons devoured his whole body. So what was in HIS coffin? Did they have to make two fake bodies? And how did they cover up Bob’s death? Accident at the Radio Shack? We all know how deadly Walkman explosions can be.

How Did They Make Billy Look 35?

When Billy first shows up at the school, my immediate assumption was “Oh, yes. Here is a classic ’80s high schooler in his mid 30s.” But then, after a bit of deep research (clicking twice on IMDb), I discovered that the actor who plays Billy was born in 1994. What kind of makeup do you use when you have a 22-year-old, but you need him to look like a sociopathic Billy Ray Cyrus? Was the casting call “Looking For: Actor Who Can Be Literally Any Age. After We’re Done With Him, He Will Look Like A Guy Who Would Fight You For The Last Half Of A Bottle Of Miller High Life.”

Now that Bob’s gone, who is going to run the local Radio Shack? After he spent his whole life in the agony of …

Bob: Well, this is a pair of headphones.

… he deserves more than to see his legacy go to waste.

Season 3 will find the Radio Shack abandoned and in disrepair. Someone will come to the front with their broken Atari Touch Tablet and beat on the door. Accountants will feel naked without their Braun ET66 calculators. BASIC will be a faint echo on a dead night. You were too good for this world, Bob. And on that note …

Why Did We Think Bob Was Evil?

Immediately upon seeing Bob acting nice to people in general, my reaction was “What’s this dude’s deal? Who is he going to betray? Get out of there, rest of the cast of Stranger Things. Samwise is here, and he’s got throats to slit.” Why would you make me recognize how cynical I’ve gotten about humanity, Duffer Brothers? Why would you make me come to terms with the fact that I see a person doing good things and I assume that he’s a demogorgon in a blazer?

We all have a little bit of Bob in our hearts. RIP Bob. Oh, and Daniel has a Twitter.

Subscribe to our YouTube channel, and check out Perhaps President Donald Trump Is Actually A Dumb Liar With A Terrible Memory, and watch other videos you won’t see on the site!