In the wake of his death, too many fell into the simplistic binary thinking that plagues our country and steamrolls politics 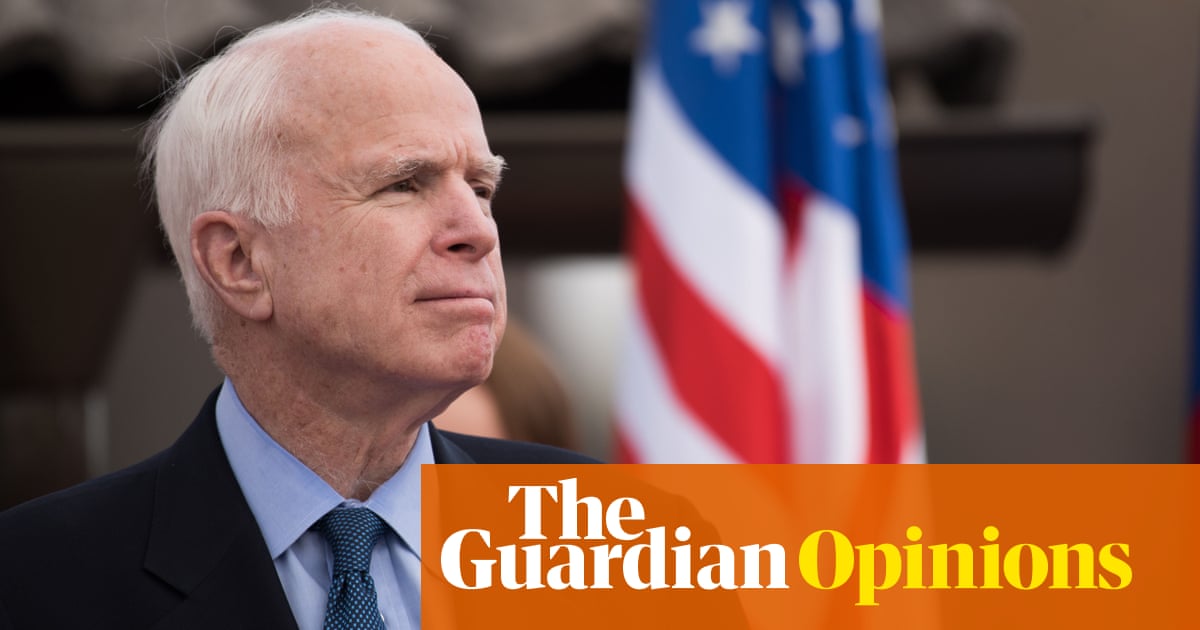 I come not to praise Senator John McCain nor to bury him plenty of people are taking care those things but to describe him and our problems with complex people and complex descriptions. I found McCain a fascinating, frustrating character who often expressed high ideals and as often betrayed them. That is something quite different than, say, the ruthlessly mercenary instincts of Mitch McConnell or the transparently self-serving amorality of Paul Ryan. With his death, the last shreds of conscience in his party have gone, though they were often only present in him in flickers of conflicted, contradicted impulses.

McCain seemed to believe in a gallant idea of what a soldier, a politician and an American should be. Though his version was often deeply at odds with mine, it appeared to be a genuine set of ideals. His life was a public performance of his meandering path to and from and around those ideals, and those trajectories were fascinating to watch, with the sense of some Faustian private struggle behind the public drama. He was often called a maverick and embraced the term, which comes from a Mr Maverick of Texas who didnt brand his calves. The term is now used to mean a dissident, an untamed soul, someone who doesnt run with the herd, but McCains orthodoxies jostled with his unorthodoxies, and he often ended up back in the Republican corral with the rest of the conservative cattle. Or on the other side after all, regretting Sarah Palin, regretting his consent to the Iraq war, which he admitted was a disaster. At this point in political history even the admission of error is an endangered species.

In the wake of his death last week, too many people fell into the simplistic binary thinking that plagues our country and steamrolls its politics: that he had been good and thus nothing bad could be said of him, or the opposite, that he had done evil and nothing good could be admitted of him, and if nothing good could be said of him nothing at all could be thought about him. This not only refused an accurate picture of a complex figure, but the possibility of complex conversation, and perhaps even that habit of appraising and evaluating and reaching ambiguous, ambivalent conclusions we call thinking.

Its a far wider problem than one of writing the obituary of a rightwing icon, a habit that seeks to reduce all things to something as simple and binary as computer code and divides the world into sides or categories beyond which nothing remains to be said or thought. Good or evil, swipe right or left, like or dislike, ours or theirs as George W Bush infamously declared on 20 September 2001, Either you are with us or you are with the terrorists, which is the authoritarian way to say shut up and fall in line.

Our country was founded in conflict not the ordinary conflict of the Revolutionary war, but the conflict between Thomas Jeffersons ideals and his actions as an owner and exploiter of other human beings. You can dismiss the slavery and uphold the ideals, or vice versa, but an understanding of who we have been and how we got here means recognizing both and how they inflect each other. And how often we use the masters tools to dismantle the masters house, including using the ideals in the constitution against the founding fathers many shortcomings on human rights.

It means recognizing Abraham Lincolns greatness and his monstrous policies toward the Lakota, recognizing that we have been neither as American exceptionalism would have it the best of nations, or the worst, but a magnificent, unresolved pile of conundrums and paradoxes and populations at odds with each other and ideals that are more often held up for admiration than theyre upheld. Those ideals are lived out best by rebels and dissidents, not in the Senate, but in the streets and jails and strikes. Its when those people those true mavericks succeed in those marginal arenas that the causes are eventually championed in the Senate.

We hear a lot about bitter partisanship now. Perhaps it begins with the willingness to reduce into simple categories or the refusal to have thoughts that reveal how leaky those categories are. Or perhaps its about the desire to have heroes, villains and simple dramas, to live in a world of cartoons where no thought needs to be more complex than a headline, or the fact that so much of our conversation now is uninflected headlines, tweets, texts and soundbites.

That is, partisan absolutism may begin in oversimplification and devout faith in categories. You can think McCain was wholly evil and still have nuanced ideas about him, because the differences between, say, Pol Pot and Joseph Stalin, or Jeff Bezos and Rupert Murdoch, are worth exploring. If we want to be able to perceive and describe the world, our conversations have to have room for the occasional harmful acts of people we like and the beneficial acts of those we dont.

McCain did a lot of harm by my estimation, and some of it he did because he genuinely believed that the collateral damage was worth it for some good cause. He believed devoutly in war and the military, and the military was perhaps the constituency he served most faithfully. He was one of the grandest characters in the theater of Congress, and his performance was first of all theater, sometimes intentionally so as when, last year, he came into the Senate chamber at the last minute and, with a thumbs-down gesture like that of a Roman emperor, ended the Trump plan to kill the Affordable Care Act (which he had, of course, opposed when it was put forth). As Jordan Weissman wrote in Slate, his veto was delivered in front of a sulking Mitch McConnell, elicited a gasp from the Senate floor and brought months of frantic work by the GOP to a crashing stop.

Then, more quietly, he voted to repeal the individual mandate, condemning millions to the loss of their health insurance after all. He stood up for the rights of the disabled, but also the privileges of the super-wealthy. He was suspicious of LGBT people in the military right through 2010, but last year spoke up for the rights of trans people in the military, perhaps to smack down Trumps attempt at a trans ban, perhaps because the generals opposed that ban. (In 2010, Think Progress noted that hed had held 11 different positions on the Dont Ask, Dont Tell policy.) Sometimes his positions seemed to be about fights within his own party with Bush Jr, who he had been defeated by and whose torture policies he ferociously opposed and then with Trump, who he thoroughly and repeatedly denounced, perhaps most scathingly and recently for Trumps groveling before Vladimir Putin in Helsinki.

His noble stances were more visible than his compromises and his go-alongs with vicious policies on Native rights, voting rights, economic inequality, and more. Perhaps it was that the theatrical McCain was out of joint with the pragmatic McCain, but that performance was riveting.

Sometimes he betrayed and then repented thus he was one of the Keating Five, caught up in protecting a corrupt savings and loan that collapsed, and then he was, with the liberal senator Russ Feingold, the co-author of the McCain-Feingold campaign finance reform act of 2002. That bill was also about his capacity to take bipartisan action, to work with colleagues across the aisle, and he counted Democrats as his friends. This made him a relic of an age before the Tea Party movement brought total war to the Republicans as their gospel and strategy. Sometimes he did good things and then slid away from them. He was early in the 2000s a co-sponsor of important climate change legislation, BUT by the time of his presidential campaign in 2008 he was so fine with his partys climate denial and inaction that he brought in Sarah Drill Baby Drill Palin as his running mate.

What captivated me at times was the sense of McCain as a tragic figure, someone who knew what he ought to do when he was not doing it as well as when he was. In his 2008 concession speech he sounded relieved to have escaped the nightmarish grip of his own ambition and all the contortions it had forced him into, including the recruitment of Palin, who he later repudiated.

He was also the protagonist of a prison epic, and the extremity of his suffering set him apart from his peers. His years as a prisoner of war, captured while his country was bombing civilians in a terrible war of aggression against the people of Vietnam, is central to the story of who he was, and it excuses and explains nothing but it does round out a story that seems epic as well as troubling. I dont want people to appraise him for his sake, but for our own: for our ability to tell irreducible stories, to see the world and its players in their full complexity.

On Twitter, the national security journalist Benjamin Wittes tells a story from 15 years ago when he saw McCain introduce Anne Appelbaums book Gulags at the Polish Embassy in Washington DC. Wittes writes, While McCain had many thoughts about the book, he said that the part that really hit him in the gut was Annes description of prisoner tapping codes by which prisoners would tap on cell walls in specific patterns to make out letters to communicate with those in adjacent cells. He described the version he and his fellow prisoners used. Then he paused and said that he still dreamed in that code sometimes. And then he tapped.

The room was silent.