Blue-and-red image appears on claw of lobster found off New Brunswick, but how it got there remains unclear 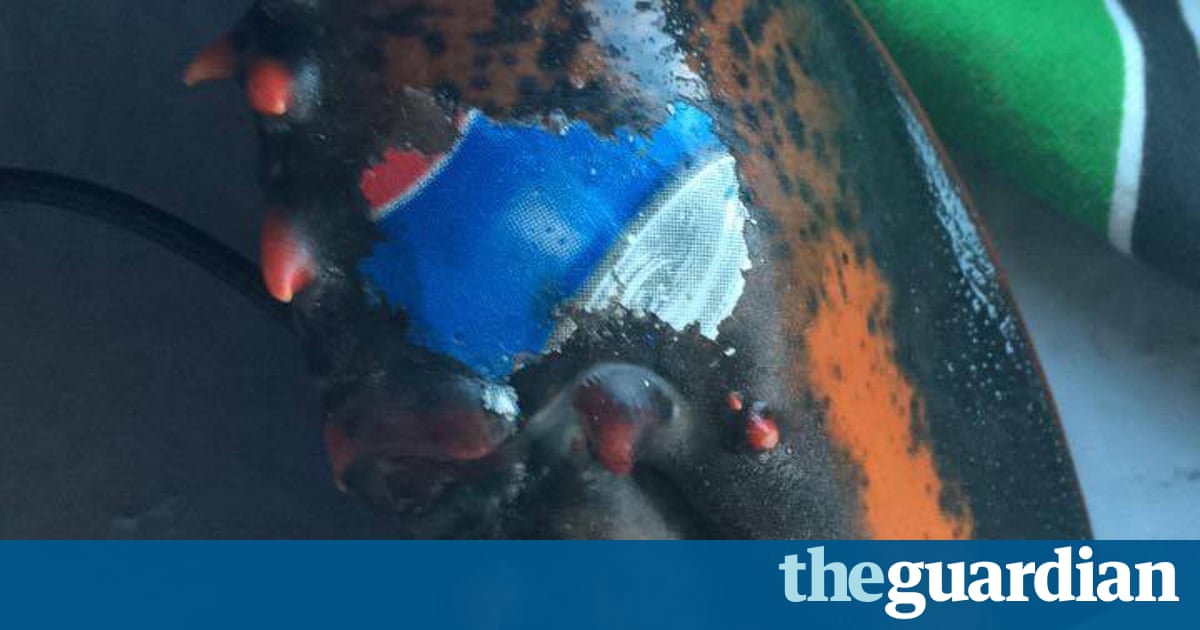 Concerns over debris littering the worlds oceans are back in the spotlight after a Canadian fishing crew found a lobster with the blue and red Pepsi logo imprinted on its claw.

Trapped in the waters off Grand Manan, New Brunswick, the lobster had been loaded onto a crate to have its claws banded when Karissa Lindstrand came across it.

Lindstrand, who drinks as many as 12 cans of Pepsi a day, quickly spotted the resemblance.

I was like: Oh, thats a Pepsi can, she said. On closer look, it seemed more like a tattoo on the claw. It looked like it was a print put right on the lobster claw.

Neither she or any of the crew had seen anything like it. More than a week after the find, debate has swirled over how it might have come to be: some believe the lobster might have grown around a can that ended up at the bottom of the ocean. Others speculate that part of a Pepsi box somehow become stuck on the lobster.

Lindstrand disputes these theories. The image on the claw was pixelated, she said, suggesting it couldnt have come from a can. And the image on a Pepsi box is far too large to be what she saw on the claw.

The logo looked like it came from a printed picture, but paper would have deteriorated in the ocean. Im still trying to wrap my brain around what exactly it was, she said.

The find comes amid growing concerns over the amount of debris accumulating in the worlds oceans. Between 5m and 13m tonnes of plastic leak into the worlds oceans each year to be ingested by sea birds, fish and other organisms, leading the record-breaking sailor Dame Ellen MacArthur to warn that by 2050 the sea could have more plastic in it than fish, by weight.

Recently, researchers documented nearly 38m pieces of plastic weighing nearly 18 tonnes that had washed up in one of the worlds most remote places: an uninhabited coral atoll in the eastern South Pacific. Scientists found hundreds of crabs scuttling about in makeshift homes made of bottle caps and cosmetic jars, with one crab even converting the inside of a dolls head into a home.

Soon after, an expedition noted that remote Arctic beaches were heavily polluted with plastic, linking the find to plastic drifting northwards up the Atlantic from Europe and North America.

To Lindstrand, the lobster with the Pepsi imprint hints at the magnitude of rubbish ending up in the ocean. We dont see it floating around us when were out there, she said. I do see stuff along the shorelines that gets washed up on the beaches or the sides of the cliffs.

After coming across the lobster, she snapped one picture before placing it Pepsi image and all into a crate with the other lobsters for sale.

The head captain, in hopes of placing it on display at a local restaurant along with a recently found rare, translucent lobster, has since reached out to the buyer in a futile attempt to track down the lobster.

Im really wishing I would have kept it now, said Lindstrand. Its the first time Ive seen something like that, and it was pretty neat. Kind of bad, but pretty neat.