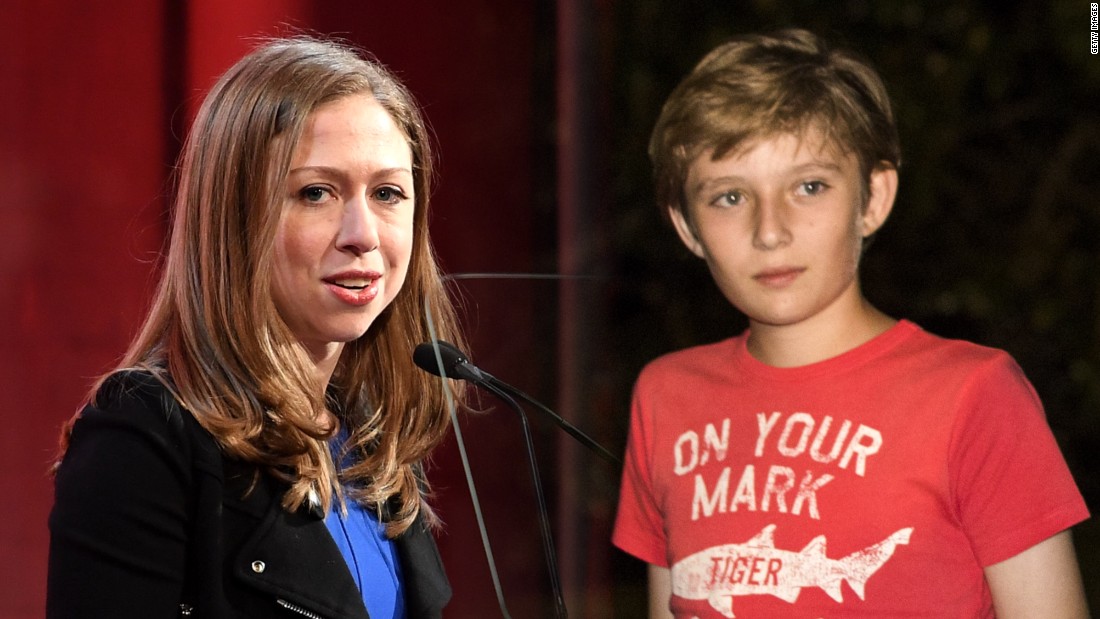 “Thank you @ChelseaClinton – so important to support all of our children in being themselves! #StopChildhoodBullying,” the first lady tweeted.
Clinton came to the youngest Trump’s defense after an article in the conservative news publication The Daily Caller criticized the President’s 11-year-old son’s style and clothing.
“The youngest Trump doesn’t have any responsibilities as the president’s son, but the least he could do is dress the part when he steps out in public,” entertainment reporter Ford Springer wrote in the story that published Monday.
The article received widespread criticism, including a tweet from Clinton.
“It’s high time the media & everyone leave Barron Trump alone & let him have the private childhood he deserves,” Clinton tweeted.
Clinton followed up on Tuesday, responding to someone who apparently had made a comment on Twitter: “Dear Matty-Barron is A KID. No child should be talked about in the below manner-in real life or online. And for an adult to do so? For shame.”
The tweet to which Clinton was responding has been deleted.
Melania Trump tweeted her thanks for the support against bullying late Tuesday night, even as her husband repeatedly taunted what he called the “damn dishonest” media over reports about his response to this month’s violence in Charlottesville, Virginia.

One of the first lady’s ‘main focuses’

While on the 2016 campaign trail, Melania Trump announced one of her “main focuses” as first lady would be to combat cyberbullying.
“Our culture has gotten too mean and too rough, especially to children and teenagers,” she said just days before the election. “We have to find a better way to talk to each other, to disagree with each other, to respect each other. We must find better ways to honor and support the basic goodness of our children, especially in social media. It will be one of the main focuses of my work if I’m privileged enough to become your first lady.”
And Tuesday isn’t the first time Clinton has stood up for Barron. Following Trump’s White House victory, Clinton tweeted: “Barron Trump deserves the chance every child does – to be a kid,” Clinton wrote. She added: “Standing up for every kid also means opposing @POTUS policies that hurt kids.”