Melania Trump tweets about coronavirus, but remains largely out of sight on the crisis 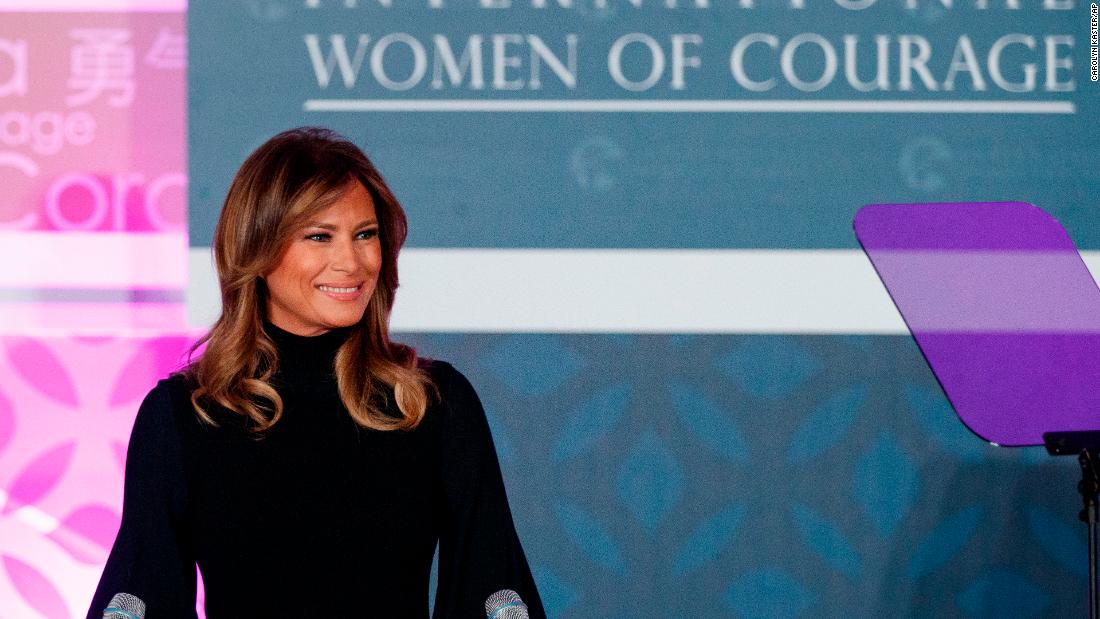 (CNN)While President Donald Trump has spoken frequently about the coronavirus outbreak, first lady Melania Trump has kept a relatively low profile, which is different from how some former first ladies have handled past national crises.

She has not been seen in public since March 10, when she delivered remarks to a national conference of PTA leaders in Virginia — where she did not mention coronavirus — and later attended a Presidential Medal of Freedom ceremony at the White House.
The White House has not responded to requests for comment from CNN as to the health status of the first lady, any plan she has to address the nation about the virus crisis, and her exact whereabouts.
CNN has also requested comment about the status of the annual White House Easter Egg Roll, slated for April 13th, for which the first lady typically oversees the planning and organization. A March 18th campaign fundraiser in Beverly Hills, California, scheduled to be hosted by Trump, was canceled last week. The White House press secretary told CNN the move was due to “scheduling conflicts.”
The first lady tweeted to her 13.3 million followers on March 11, posting: “Our great country is fighting hard against the #Coronavirus. This nation is strong & ready & we will overcome. Please take action to prevent further spread. Visit cdc.gov for updated heath info & updates.”
While Trump has during her tenure as first lady occasionally had lengthy periods of private time, with infrequent public events or remarks, US first ladies have during turmoil or tragedy traditionally used their role to be vocal administration advocates.
“After 9/11, Laura Bush became the first first lady to deliver the weekly presidential radio address — she used it to draw attention to human rights abuses against Afghan women,” said Kate Andersen Brower, CNN contributor and author of “First Women: The Grace and Power of America’s Modern First Ladies.”
“It was a powerful message to have the first lady take that leadership role as calmer-in-chief,” she added.
As far back as the Great Depression, first ladies have called upon their idnfluence to spread messages of unity. Eleanor Roosevelt summoned empathy for the nation, visiting with families affected by the massive economic downturn. Years later, Roosevelt also increased support for the war effort after the bombing at Pearl Harbor.
“I think Melania could look at what Eleanor Roosevelt did and talk about her own fears, for her own family, and help people ‘rise above,’ the crisis, as Roosevelt said in her radio address after Pearl Harbor,” Brower said. “Melania’s ‘Be Best’ campaign is focused on children so this is an opportunity for her to offer parents suggestions for how to talk to their children, many of whom are home from school for weeks.”
“Now is the time for more information and more communication. Not less!” Brower said. “Luckily for Melania, she has the internet so she can tweet messages and videos and speak directly to the American people. She has access to all this technology that first ladies of the past did not have the benefit of.”
Trump has at times tweeted her thoughts and condolences when there has been an episode of global tragedy, most recently about the sudden death of NBA star Kobe Bryant. In October of 2017, she recorded her only Public Service Announcement, encouraging Americans to support one another after three devastating hurricanes. “The President and I have witnessed firsthand the compassion and commitment of Americans as friends, neighbors, and strangers continue to volunteer time and money to help one another following the recent hurricanes. Your help is still needed,” Trump said. “Donate to an organization of your choice, and volunteer to help your fellow Americans.”
While the first lady has this week demonstrated relative public silence, she, along with President Donald Trump, did make time to send a quarantine care package to South Carolina Sen. Lindsey Graham, according to a tweet from the GOP senator, who’s been one of the president’s most vocal allies.
The South Carolina Senator announced on Thursday he was self-isolating, following possible exposure to the virus while spending time last weekend at Mar-a-Lago, the President’s Florida resort. Four people who were there have now reportedly tested positive. The first lady did not travel to Mar-a-Lago last weekend, a White House official told CNN, choosing instead to remain in Washington.
This story has been updated to include Melania Trump’s tweet Sunday evening.