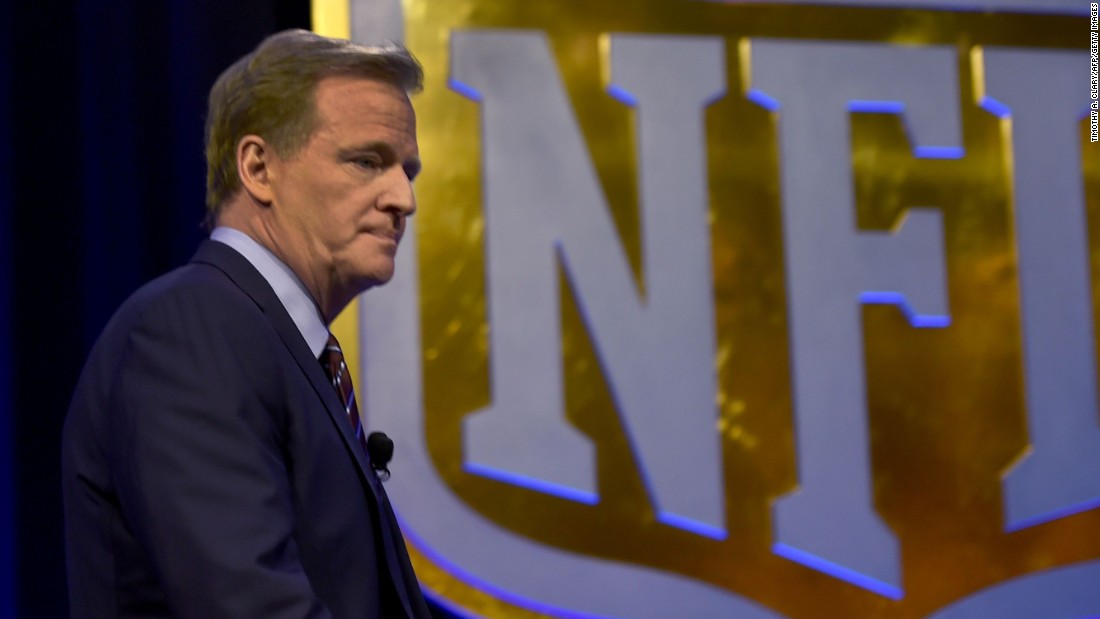 Washington (CNN)President Donald Trump came under harsh criticism Saturday from the NFL and some of the NBA’s top players after he blasted prominent athletes for kneeling during the national anthem, putting himself in the center of a controversy with significant racial and cultural undertones.

NFL Commissioner Roger Goodell slammed Trump in a statement Saturday morning, calling the President “divisive” for remarks he made at a rally in Alabama Friday night, while one of the most famous athletes in the world, LeBron James, called Trump a “bum” for a Saturday morning tweet aimed at the Golden State Warriors’ Stephen Curry.
Trump responded to the criticism later Saturday in a series of tweets, saying that playing for a sports league is a “privilege” and that players should not be able to disrespect the American flag or the US without risking being “fired.”
“If a player wants the privilege of making millions of dollars in the NFL, or other leagues, he or she should not be allowed to disrespect ….” Trump tweeted. “Our Great American Flag (or Country) and should stand for the National Anthem. If not, YOU’RE FIRED. Find something else to do!”
Trump’s tweets and harsh reaction highlight an extraordinary moment — the President, NFL commissioner and a top basketball player embroiled in a public fight over unity and patriotism.
Goodell said Trump’s criticism of NFL players kneeling in protest during the National Anthem show a “lack of respect” for the league and its players.
“The NFL and our players are at our best when we help create a sense of unity in our country and our culture,” Goodell said in the statement. “There is no better example than the amazing response from our clubs and players to the terrible natural disasters we’ve experienced over the last month. Divisive comments like these demonstrate an unfortunate lack of respect for the NFL, our great game and all of our players, and a failure to understand the overwhelming force for good our clubs and players represent in our communities.”
At a rally for Alabama Republican Sen. Luther Strange, Trump said team owners should fire players for taking a knee during the national anthem. He added that if fans would “leave the stadium” when players kneel in protest during the national anthem, “I guarantee, things will stop.”
Last year, Colin Kaepernick — formerly with the San Francisco 49ers, but currently without a team — drew national attention for refusing to stand during “The Star-Spangled Banner” prior to kickoff.
“I am not going to stand up to show pride in a flag for a country that oppresses black people and people of color,” Kaepernick told NFL Media in August 2016.
Trump also provoked outrage from James for retracting his White House invitation to Curry of the NBA championship Warriors in a tweet Saturday morning after Curry criticized the President.
“U bum @StephenCurry30 already said he ain’t going!” James responded. “So therefore ain’t no invite. Going to White House was a great honor until you showed up!”
Earlier on Saturday, Trump tweeted: “Going to the White House is considered a great honor for a championship team. Stephen Curry is hesitating, therefore invitation is withdrawn!”
Curry remarked Friday that he doesn’t want to attend the White House ceremony scheduled to commemorate the title.
“‘By acting and not going, hopefully that will inspire some change when it comes to what we tolerate in this country and what is accepted and what we turn a blind eye to,” Curry told reporters at the Warriors’ media day. ”It’s not just the act of not going. There are things you have to do on the back end to actually push that message into motion.”
Other notables came out in support of Curry.
ESPN anchor Jemele Hill chimed in, tweeting to Curry, “Hey @StephenCurry30, welcome to the club bro.”
Last week, Trump demanded an apology on Twitter for a series of tweets Hill had sent describing Trump as a white supremacist. Later White House press secretary Sarah Sanders said on Fox News that Hill’s tweets were “highly inappropriate, and I think ESPN should take actions.”
Singer-songwriter John Legend also tweeted about Trump Saturday saying of Curry’s decision, “Perhaps it’s not a great honor while your stench is there.’
Legend continued with a series of tweets aimed at the President.
“Trump thrives on division and chaos. He wants to pit us against each other because he thinks his side can win (w/voter suppression, etc.),” Legend tweeted later in the afternoon.
CNN has reached out to the White House for comment on Trump’s tweet about Curry and whether the invitation will be withdrawn.