No, this new House battleground poll is NOT good news for Republicans 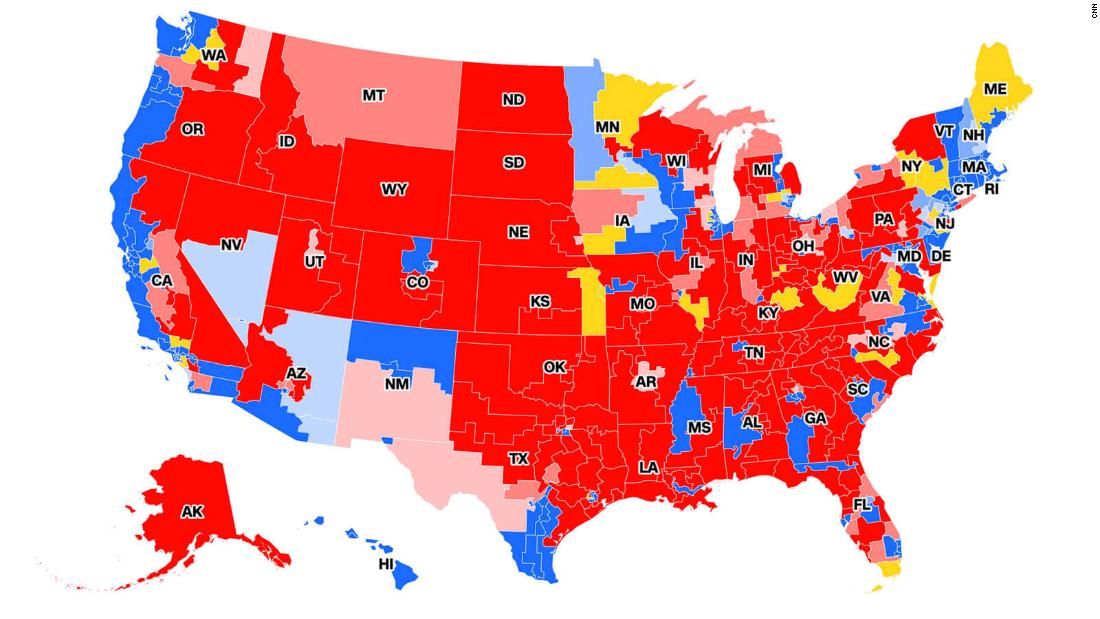 (CNN)Of late, House Republicans have experienced something of an uptick in expectations — as the party’s base has stirred to life amid the battle over the confirmation of Supreme Court Justice Brett Kavanaugh and President Donald Trump’s relentless focus on a caravan of people moving toward the nation’s southern border in hopes of gaining entry.

There’s no question that there has been some marginal narrowing of things like the generic ballot test in recent national polls, movement that suggests that the most catastrophic outcome for House Republicans — seat losses upward of 40 — are less likely today than, say, a month ago.
In that vein, some Republicans seized on new data from a poll of 69 battleground House districts by The Washington Post and the Schar School that shows 50% of voters backing the Democratic candidate in their district and 47% supporting the GOP candidate.
That 3-point gap seems like really good news for a party that has faced, at times, double-digit deficits in the generic ballot. Right? Wrong — on a couple of fronts.

1. This is not a generic ballot question

The generic ballot tests goes like this: “If the election were today, would you vote for the Democratic or Republican candidate running in your district?” This is not that. The Post story on the poll notes: “Surveys identified the major-party candidates by name in each district.” So, in each of these 69 battleground seats, the respondents were given the actual names of the two major party candidates on the ballot and asked to choose which candidate they would prefer. Then those numbers were aggregated into the total percentage choosing the named Democratic candidate in their districts and the total percentage choosing the Republican one.

2. These districts are not 50-50 partisan splits

Lost, I think, amid the focus on the 50%-47% number is the fact that of these 69 districts, 63 of them are currently controlled by Republicans. Forty-eight of them were carried by Trump in 2016. And in that election, the Republican candidates took 56% of the vote in these 69 seats as compared to just 41% for the Democrats. This is not neutral ground — or anything close to it. These are seats that, in the main, Republicans, in anything close to a status quo national political environment, would have very little worry about winning. That these districts are even marginally competitive speaks to the tilt of the playing field; that the Democratic candidates have a lead — albeit a narrow one — shows just how difficult this environment still is for Republicans.
One other point worth considering here: The 3-point Democratic edge is statistically unchanged from the 50%-46% advantage in these 69 districts that the Post-Schar poll found in the beginning of this month. Also unchanged is the fact that women are the reason for Democrats’ lead; women went for the Democratic candidate by 15 points in the earlier poll and favor the Democratic candidates by 13 points — 55% to 42% — in this latest survey.
What the Post-Schar polling finds then is not good news for Republicans but good news for Democrats. In the battle for the House, the terrain of which should overwhelmingly favor Republicans, Democrats are running even or even slightly ahead. And that fact hasn’t changed throughout a month that, broadly speaking, has been a good one for Republican efforts to gin up excitement and intensity in their base.
The Point: Numbers don’t always tell the story that a cursory glance suggests they do. Or the story you want them to.