One Tax Loophole Untouched So Far: The Trump Golf-Course Break

Republican lawmakers pushing to close dozens of tax loopholes have left open one that’s been good to President Donald Trump: the golf break.

With Senate Republicans expected to unveil the outline for a sweeping tax rewrite on Thursday, a lucrative break for golf-course owners — including the president — remains firmly in place in the House version of the measure. The Obama administration estimated in 2014 that closing the controversial loophole would save more than $600 million over a decade.

While Republicans are eliminating many write-offs, the House version of the bill allows golf-course owners to claim deductions for promising never to build on their links. The Trump Organization, which owns a dozen courses in the U.S., has taken advantage of the break in the past, using a law that’s supposed to help preserve open space.

The golf deduction is just one example of how Trump businesses would benefit under the House Republican plan. Interest expenses for loans on commercial real estate, for instance, would also remain deductible in many cases, even as that benefit is reduced for most other industries.

“The commercial real estate industry is looking at this and saying, ‘I love it,’” said Daniel Shaviro, a tax-law professor at New York University. “Despite his efforts to prevent us from knowing about his tax returns, it’s clear this is a huge plus for Trump.”

Trump said the proposed House tax reform would hurt him on balance. When administration officials met with Democratic senators on Tuesday, Trump, who was in Seoul, phoned in an appeal for them to pass the bill. He said that his own accountant told him he would be a “big loser” if the deal is approved as written, according to the Washington Post, which cited people in the room who heard the president on the phone. 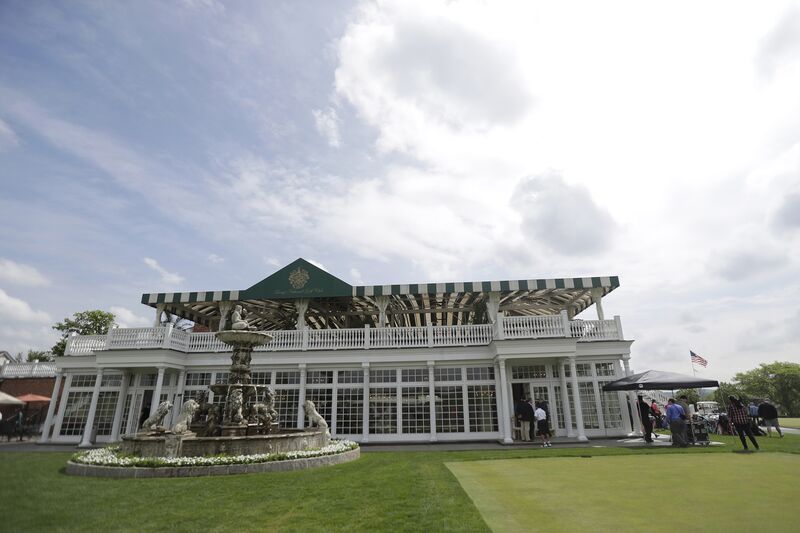 During that same trip, in a speech to South Korea’s National Assembly, Trump plugged his private golf club in New Jersey as he praised the achievements of the Asian nation’s professional golfers. Trump has taken advantage of the tax benefit for golf courses and other open spaces for at least four of his properties, including the Trump National Golf Club in Bedminster, New Jersey, and the course at the private Mar-a-Lago Club in Palm Beach, Florida, according to the Wall Street Journal.

The golf-course deduction in particular has drawn scrutiny before in Washington from both sides of the aisle. Former President Barack Obama included restrictions on the deduction in his budget for at least three years. In April, Republican Senator Jeff Flake listed the golf course deduction in a report he wrote entitled, “Tax Rackets: Outlandish Loopholes to Lower Tax Liabilities.”

Representatives for Trump and the House Ways and Means Committee, which is working on the House’s version of tax-cut legislation, didn’t respond to requests for comment.

Here’s how it works: a golf-course owner agrees to restrict development on his or her property in perpetuity, which is known as creating a conservation easement, and to donate that easement to either a land trust or a local government. He or she can continue to own the golf course.

The property owner then gets two appraisals: one for the value of the property if it were sold on the market to the highest bidder without any restrictions on development, such as a homebuilder that would subdivide it, and the other for the property with the easement intact. The difference between those two values can be deducted from the golf course owner’s income for tax purposes.

The laws allowing for conservation easements were meant to protect forests, farmland and other open space for the benefit of the public. Golf courses are just one of many types of land that use the easements.

“For what I see and hear about golf easements, 98 percent of the time it’s not what the tax code was intended to provide a benefit for,” said Steve Small, a tax lawyer who worked in the chief counsel’s office at the Internal Revenue Service from 1978 to 1982 and wrote regulations on conservation easements.

In some cases, the tax benefit can make sense. There are communities where golf courses are some of the only open space available. Without the easements, an owner might be tempted to sell out to the highest bidder, which might develop housing on the space, said Sylvia Bates, director of standards and educational services at the Land Trust Alliance, a conservation group.

But in practice, the deductions that land owners take for golf courses are enormous compared with the conservation value, said Ruth Madrigal, a tax lawyer who worked on conservation easements for the U.S. Treasury department during the Obama administration. A developer can build homes and a nearby golf course, get a conservation easement on the links and claim a deduction that can pay for the entire development, she said.

“The Obama administration wanted to cut the deduction because it viewed the policy’s costs in total as far exceeding the conservation benefits,” Madrigal said.

Getting rid of tax deductions for golf course owners may make sense, but that doesn’t mean it will happen, said Dean Zerbe, a tax lawyer for Alliant Group who worked on the Senate Finance Committee from 2001 through 2008. The House Committee needs to make up for trillions of dollars lost from its planned tax cuts over the next decade, and the gains from changing golf-course rules may not be big enough to be worth the time, he said. But eliminating the benefit would look good to the public, he added.

“I like the optics of getting rid of the easement for golf courses,” Zerbe said. “They have to raise a lot of money.”