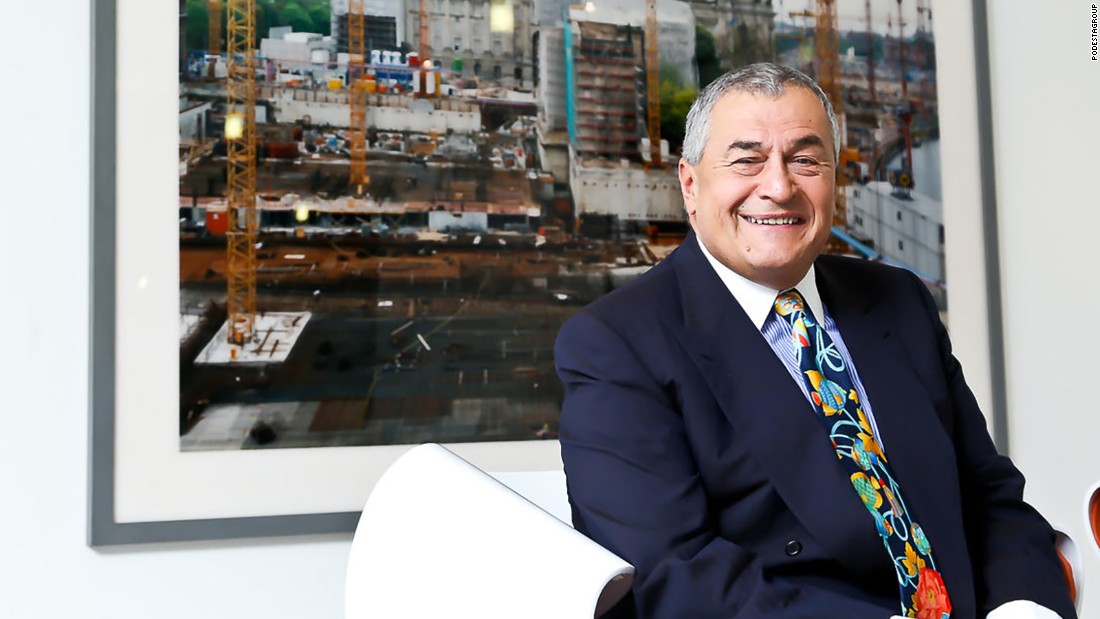 (CNN)One of Washington’s most prominent lobbying firms is on the verge of shuttering after becoming ensnared by special counsel Robert Mueller’s investigation.

Kimberley Fritts, the chief executive of the Podesta Group, told employees during a Thursday staff meeting that the firm would cease to exist at the end of the year, according to two sources. Employees were asked to clear out their desks and were told they may not be paid beyond November 15, multiple sources said.
Fritts told the employees the Podesta Group may try to provide health care through the end of the year, according to two people in the meeting.
How much trouble is Tony Podesta in?
The developments come after the Podesta Group was tied last week to Mueller’s indictments of Paul Manafort and Rick Gates, who pleaded not guilty after being charged with failing to file as foreign agents relating to a decade of work they did for the Party of Regions, a pro-Russia political party in the Ukraine.
Mueller’s special investigation team has also interviewed multiple people from the Podesta Group, which was recruited by Manafort and Gates to work along with another firm.
Talk of potentially closing the Podesta Group marks a dramatic downfall of one of K Street’s most iconic and well-connected firms. In its heyday, Podesta Group was the largest non-law firm lobbying organization in Washington. Tony Podesta, the firm’s founder and chairman, helped fuel the company with work for foreign governments. He and his brother, John, founded the company almost three decades ago. (John Podesta chaired Hillary Clinton’s 2016 presidential campaign. He left the firm in 1993.)
A Podesta Group spokesperson declined to comment for this story. Fritts could not be reached for comment Friday via her Podesta Group email.
Mueller is looking into whether the Podesta Group properly identified to federal authorities its foreign advocacy for the European Centre for a Modern Ukraine, according to people familiar with the investigation. The ECFMU is a Brussels-based non-profit group that federal prosecutors have called a mouthpiece for pro-Russian Ukrainian politicians.
In foreign lobbying, anyone representing a foreign political party or government must publicly file reports disclosing the relationship and details of their meetings.
Manafort and Gates have pleaded not guilty. The Podesta Group has said it has fully cooperated with the special counsel’s office and said it did not register as a foreign agent for its ECFMU work because that group misrepresented itself. The firm said it retroactively filed a disclosure after discussions with the Department of Justice.
Podesta turned over his leadership responsibility to Fritts last week on the same day the Manafort and Gates indictments were unsealed. During an October 30 meeting with approximately 60 staffers, Podesta said he would fight against his potential legal issues as well as the reputational risk he and his company faces, according to sources who heard the remarks.
But any hopes for a smooth transition quickly unraveled.
Several top lobbyists are planning to leave the firm for various new ventures, according to eight sources. Fritts herself decided over the past week to leave and start a new firm.
Amid the turmoil, Podesta may try to maintain a presence on K Street.
“He didn’t say he was retiring. He didn’t say he was resigning” last week, someone familiar with the firm said. “He’s a prideful person. He built a very influential company over 30 years, and I think he believes he hasn’t done anything wrong.”
On Thursday, Podesta told staffers he had no plans to take up golf or tennis, and he may take on a couple of clients, according to a person familiar with his remarks.