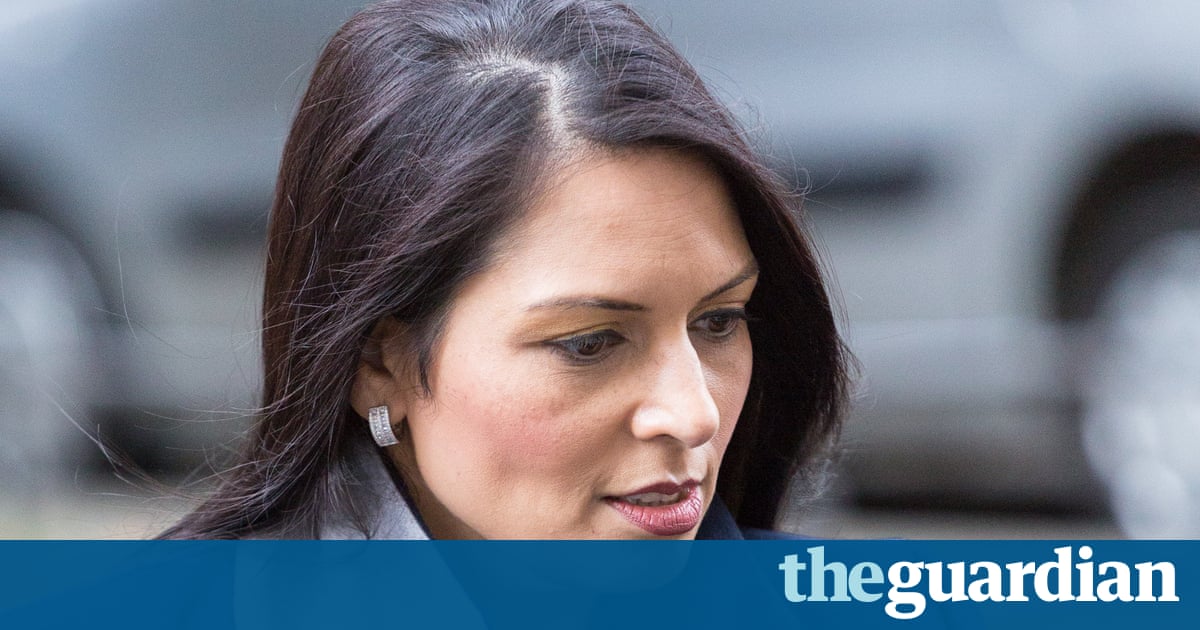 Priti Patels position in the cabinet was increasingly precarious after it emerged she had failed to inform Theresa May of departmental plans to send aid money to the Israeli army.

In a second public rebuke within as many days, No 10 on Tuesday said that Patel had not informed the prime minister about the plans at a crunch meeting on Monday which was supposed to draw a line under the row.

Instead, May learnt about the proposals from reports in the media, a Downing Street source said.

The disclosure adds to the pressure upon Patel, who was forced to apologise for holding 12 undisclosed meetings while on a family holiday in August. She was also rebuked by No 10 after giving the false impression in an interview with the Guardian that Boris Johnson and the UK Foreign Office knew about the meetings in advance.

Conservative MPs failed to rally behind Patel on Tuesday when her conduct was debated in parliament, which will be noted by her critics within the cabinet and the party.

The secretary of state was not present in the chamber for the meeting, because of a longstanding commitment to visit Uganda and Ethiopia with Liam Fox, Downing Street said.

The UK does not recognise Israels permanent presence in the Golan Heights, which was seized from Syria in the 1967 war, and so providing aid to the Israeli army in this or other occupied territories would be likely to contravene UK policy.

Patel came under pressure following reports by the BBC on Friday that she had used a holiday in Israel to meet a series of ministers without informing any UK government officials.

On the same day, she told the Guardian that the foreign secretary and foreign office officials knew of the meetings.

Patel was hauled in to Downing Street for a meeting on Monday, after which No 10 issued a statement saying that a possible breach of the ministerial code had been discussed.

On Tuesday morning, it emerged that a conversation had taken place between Patel and Israeli officials about funnelling money via the Israeli army.

The prime ministers spokesman said: The secretary of state did discuss potential ways to provide medical support for Syrian refugees who are wounded and who cross into the Golan for aid. The Israeli army runs field hospitals there to care for Syrians wounded in the civil war. But there is no change in policy in the area. The UK does not provide any financial support to the Israeli army.

May learned of Patels meetings with Israeli politicians on Friday a day after she held a meeting with Netanyahu in Downing Street to mark the centenary of the Balfour declaration.

Patel has clarified her previous remarks to the Guardian in which she had appeared to suggest that Johnson knew of her schedule beforehand.

Patel also said: This summer I travelled to Israel, on a family holiday paid for by myself. While away I had the opportunity to meet a number of people and organisations. I am publishing a list of who I met. The Foreign and Commonwealth Office was aware of my visit while it was under way.

In hindsight, I can see how my enthusiasm to engage in this way could be misread, and how meetings were set up and reported in a way which did not accord with the usual procedures. I am sorry for this and I apologise for it.

Patel did not tell British diplomats she was holding the meetings, which is the convention.

The Labour party called for an immediate investigation into whether Patel broke the ministerial code of conduct.

In Patels absence from parliament, only four of her own partys backbenchers spoke in the debate and expressed concerns and reservations about recent events involving Patel.

Crispin Blunt, a former chair of the Commons foreign affairs committee, said it was important for cabinet ministers to understand both sides of the IsraelPalestinian conflict.

Implying that Patel did not fully understand the Palestinian perspective, he told Alistair Burt, an experienced minister for the Middle East: He [Burt] is probably the most equipped of her ministers to take her very gently in hand, and I hope he does.

Sir Hugo Swire, the former Foreign Office minister, said the public wanted transparency and accountability from ministers. Fellow Tory Bob Blackman said it was important to clarify the responsibility of ministers when they went abroad.

The Israeli militarys main humanitarian operation in the Golan Heights is Operation Good Neighbour, an effort to aid Syrian civilians.

That has seen wounded Syrians being brought across the border often in the middle of the night to be treated in Israeli hospitals in the countrys north. Israel is also said to supply a small medical clinic at an undisclosed location just inside Syria.

The existence of the Israeli militarys aid efforts was disclosed shortly before Patels visit and has been held up by the Israeli government since as an example of its humanitarianism, even towards the citizens of a country with which it does not have friendly relations.

On the other side of the equation and an issue that would have rung alarm bells if diplomats had been present is the fact that Israel is also player in the Syrian war.

The country has launched over 100 airstrikes during the war, usually against Hezbollah weapons stores inside Syria, and carried out targeted killings.