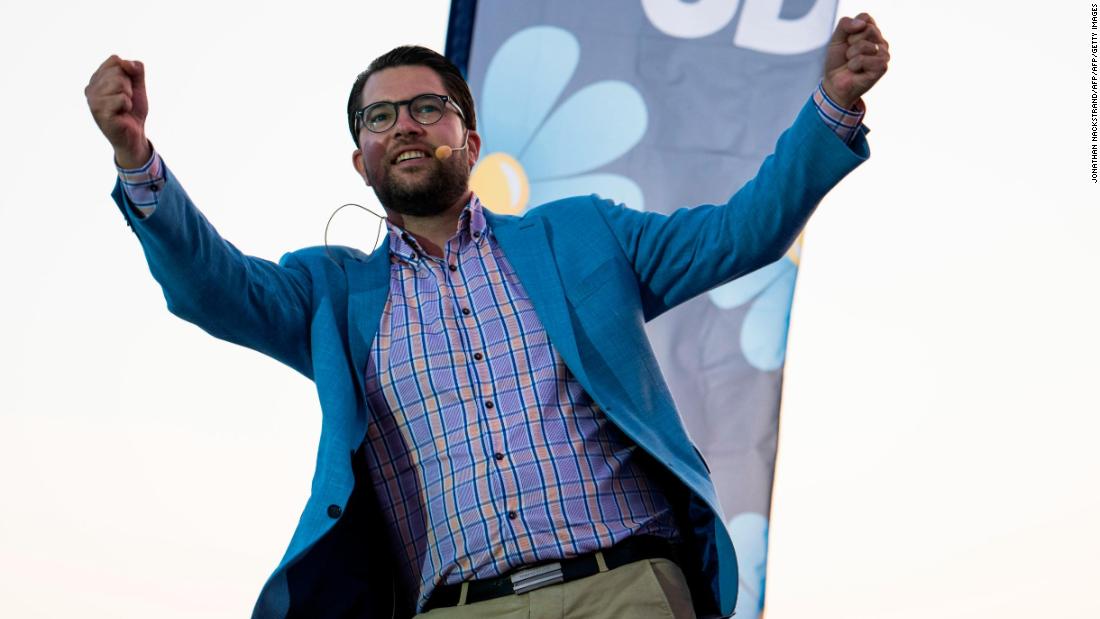 Stockholm, Sweden (CNN)Sweden has been plunged into political uncertainty after both the main centrist coalitions failed to win a majority in general elections Sunday, and as the far-right anti-immigration party gained ground, further fracturing the vote. 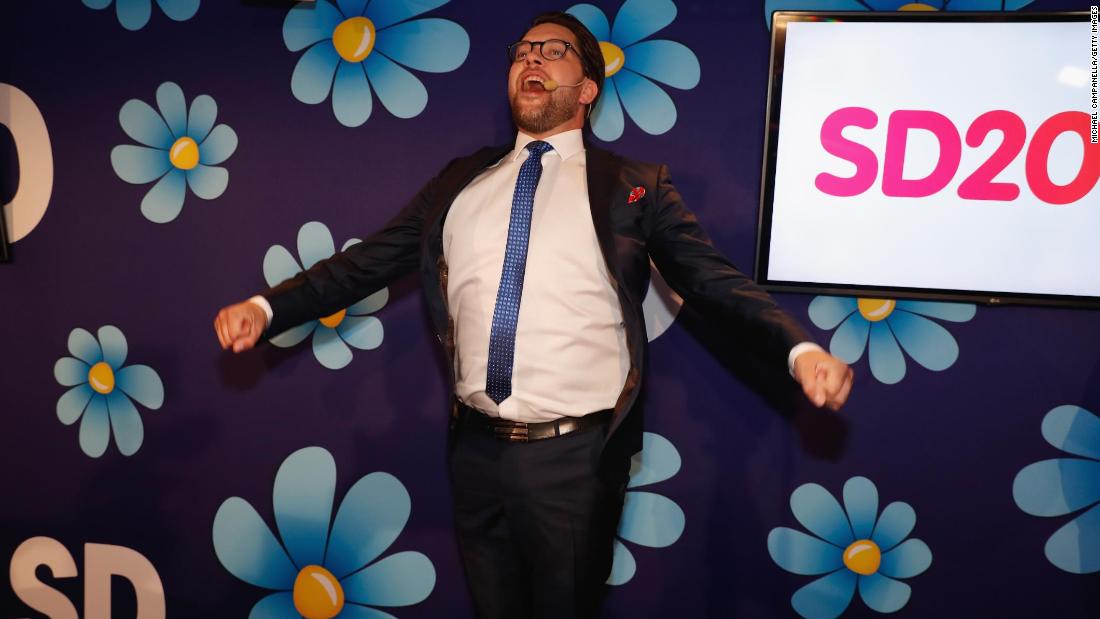 The talks will be a test of one of the few remaining left-wing bastions in Europe, a region leaning further to the right after the mass migration of refugees in 2015, at the height of the Syrian war and as conflicts in Afghanistan and parts of Africa worsened.
The Sweden Democrats, who have promised to freeze migration and want to take the nation out of the European Union, gained ground with 17.6% of the vote, well up from the 12.9% it won in 2014, but short of the dramatic surge pollsters had predicted.
Its leader, Jimmie Akesson, treated the gains as an election win and basked in his role as kingmaker.
“We see that we are this election’s winner, but now we enter a new mandate period and now we are going to get influence over Swedish politics for real,” Akesson told supporters in a speech as the results rolled in.
He called on other parties to enter into talks with the Sweden Democrats. He singled out the centre-right’s candidate for premier, Moderates leader Ulf Kristersson, for possible negotiations.
Swedish Prime Minister Stefan Löfven of the Social Democrats, which leads the center-left bloc, called for cooperation across the political divide and warned against inviting the far right into government. 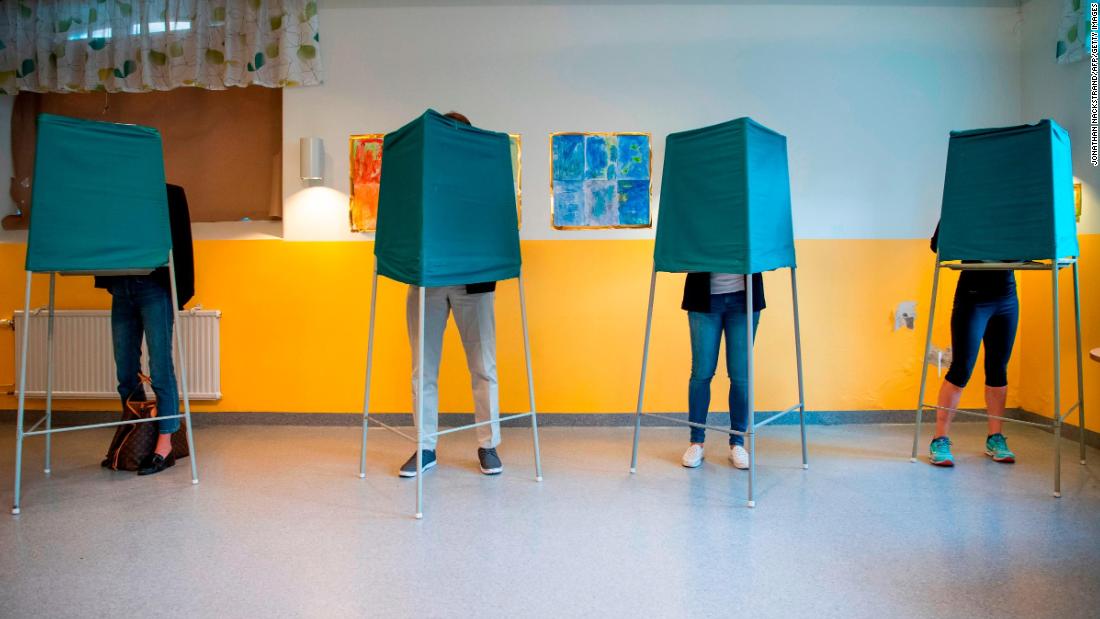 He reminded Swedes that he would remain in office in the coming weeks and asked people not to speculate on the election’s official outcome.
“We have two weeks left until parliament opens. I will work on calmly, as prime minister, respecting voters and the Swedish electoral system,” Löfven told a party rally.
Writing on Twitter in the wake of the preliminary results, former Swedish prime minister Carl Bildt of the center-right Moderates advised Löfven to step down and allow the speaker of parliament to begin preliminary consultations on a new government.
“This would reduce uncertainty and mitigate friction between all parties,” Bildt said.
If the ruling coalition fails to form a government it would be a historic loss for the Social Democrats, which have dominated Swedish politics since the 1930s. 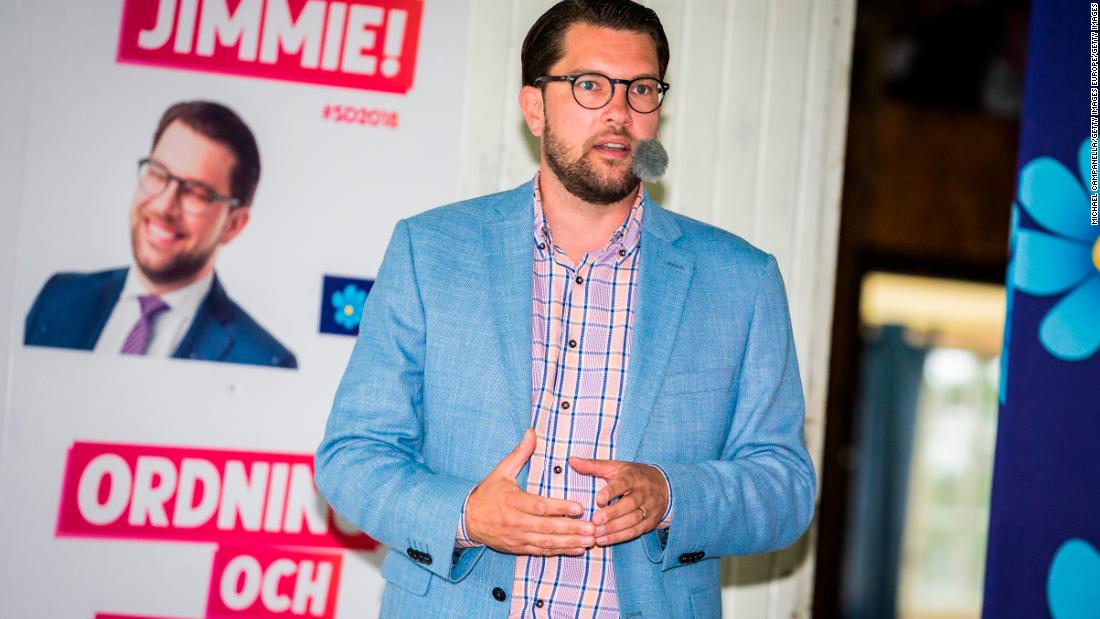 The Social Democrats came in first as expected, but won just 28.4% of the votes, its worst showing in more than a century. Its coalition won 40.6% of the vote, just a hair’s breadth ahead of the opposition center-right bloc, which gained 40.3%.
Those results will be finalized on Wednesday and could change before election authorities make them official.
Political analyst Nicholas Aylott from Södertörn University told The Local Sweden that a German-style “grand coalition” between the main Social Democrats and Moderates was possible, but another alternative might be an alliance under a new prime minister.
“It might not be what Sweden really needs. But it is not a recipe for chaos.”

Although the Sweden Democrats did not fulfill predictions in exit polls that it would become the nation’s second-biggest party, its success has confirmed fears that Europe’s rising far-right tide has now reached Sweden, one of the world’s most liberal countries.
Immigration became highly politicized following a steady increase in new arrivals. In 2015, Sweden, a country of 10.1 million people, took in more than 160,000 asylum-seekers.
Support for the far right in Sweden mirrors similar trends in other European nations. Anti-migrant parties in Germany, Austria, Denmark, France, Hungary, Italy and the UK have all made gains in recent years.
Senior Social Democrats official Anders Ygeman conceded that the crisis had damaged his coalition’s prospects.
“We paid the price for being in government. We suffered from the refugee crisis in 2015. That’s why the Sweden Democrats are as big as they seem to be,” he told CNN in Stockholm. 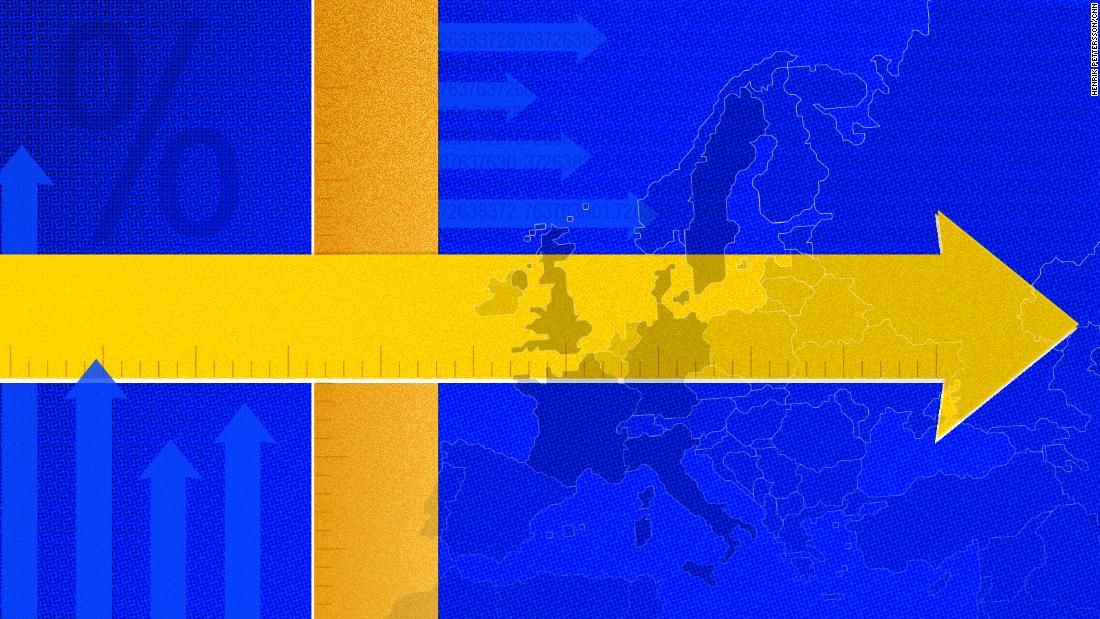 The results show Sunday’s vote was one of the toughest challenges in decades to Sweden’s social democracy, characterized by high tax rates and a substantial welfare system aimed at reducing inequality through social inclusion.
Leaders in Brussels will be disappointed with the far right’s gains ahead of the European Parliament’s elections in May next year, as they bid to discourage euroskepticism following the UK’s decision to leave the EU, and as populist parties form alliances to shake up the EU establishment ahead of the vote.
Far-right populists in Europe, however, were celebrating the Sweden Democrats’ rise.
Marine Le Pen, leader of France’s far-right euroskeptic National Rally, said on Twitter: “Another bad night for the European Union in perspective. The democratic revolution in Europe is underway!”
Italy’s euroskeptic Deputy Prime Minister Matteo Salvini tweeted that Sweden had decided to change after years of “savage migration.”
“Sweden, land of the multiculturalism and model of the left, after years of savage immigration has finally decided to change. Now, together with Jimmie Akesson, I say no to this Europe of bureaucrats and speculators, no to the clandestine [immigrants], no to Islamic extremism.”