The racist Serena cartoon is straight out of 1910 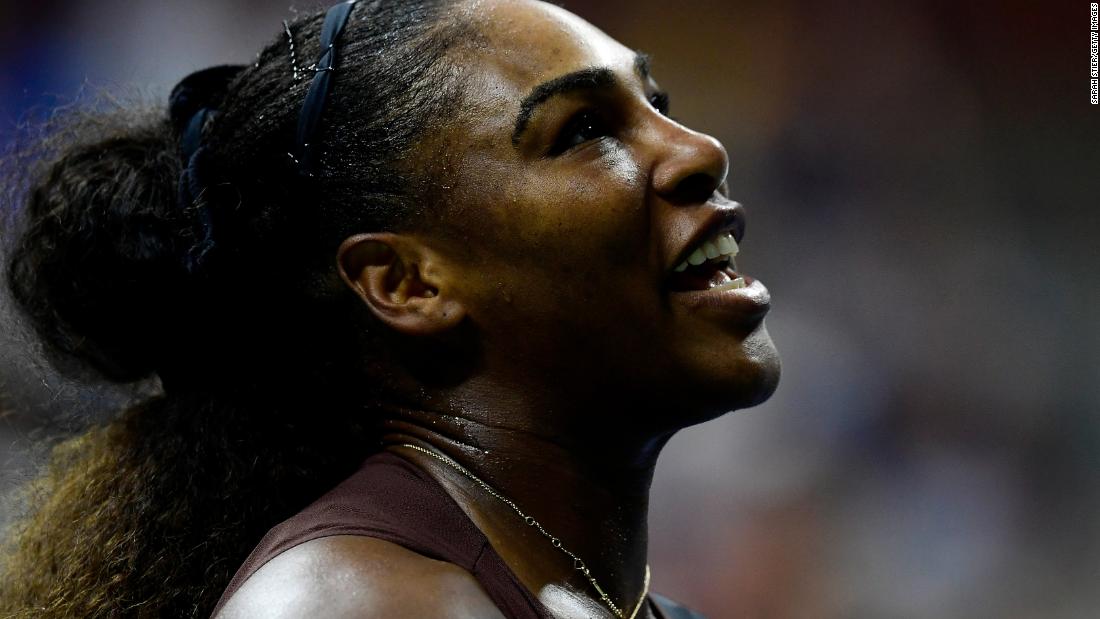 Mark Knight and some of his defenders will tell you the outcry against his Serena Williams cartoon, roundly criticized this week for indulging noxious racist imagery, are about “political correctness” or progressive silencing of dissent. Don’t believe that argument. It depends on the belief that people are incapable of making aesthetic distinctions. In an editorial, the newspaper defended his cartoon, saying it had nothing to do with race.
Mark Knight is participating in a long tradition of black stereotype, or what I often call a tradition of visual imperialism. I am sure some of you are rolling your eyes, believing that using the word “imperialism” is hyperbole. But if imperialism is about extending a nation’s authority through colonization, it is clear that European standards of beauty and fantastic representations of a black grotesque have thoroughly colonized every genre, and every medium. Knight’s cartoon depends on a black grotesque seeming natural, which makes it the very essence of visual imperialism.
One of our great losses in the overall decline of newspapers is the decrease of editorial cartoonists on staff. But many people still circulate editorial cartoons on social media because the gifted artist can find ways — through the art of caricature, precision of the pithy punch line, and imaginative framings of events — to either make us see something differently or perfectly capture what we feel in an uniquely expressive way. 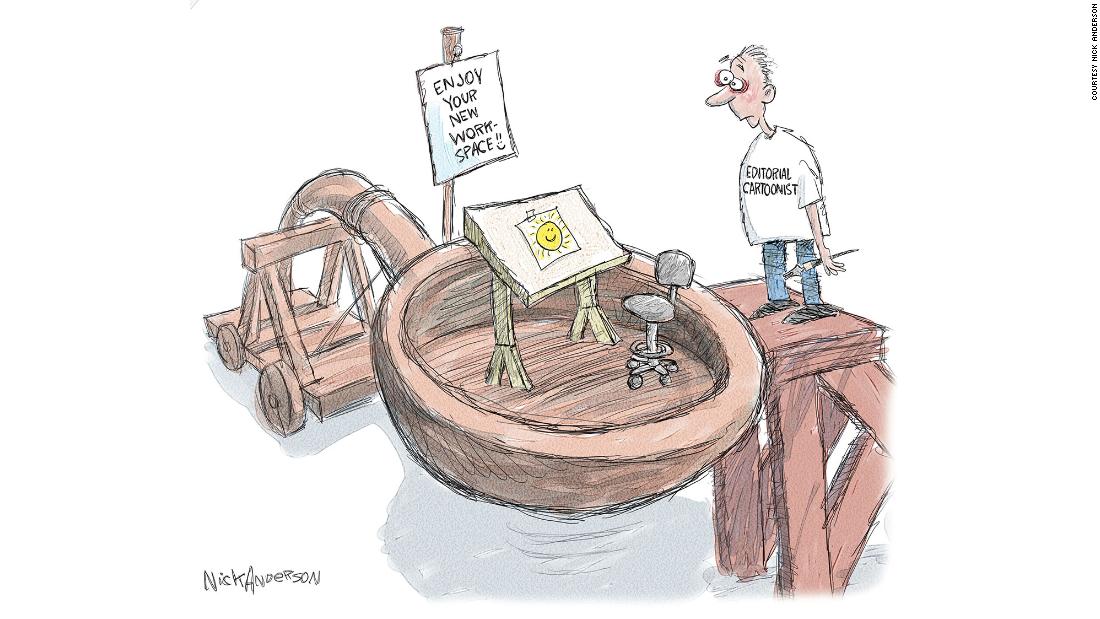 When I was growing up I looked forward to the cartoons of Mike Peters in the Dayton Daily News, who skewered both locally and the nationally known figures and situations, and whose wit helped his audience laugh and rage. From celebrated Harper’s Weekly cartoonist Thomas Nast in the 19th century to the present, editorial cartoons, particularly in the United States, have been a popular art form condemning and celebrating citizens.
In all that time, however, cartooning has also obviously been an opportunity for ugly regurgitation and reinforcement of stereotypes used to justify colonization, slavery, and discrimination. In American history in particular, editorial cartoonists set the standard for aesthetic choices that demonize black people. Nast, for example, would depict former slaves with a realistic drawing style when he wished to express sympathy for abolition and as racist caricature to express fear about their equal citizenship.
Knight’s Serena cartoon, in its use of racist caricature, is very much in this tradition of condemning black citizenship in cartooning. Not only does it incorporate the most base representations of black women, it also replicates imperialist visual themes like a black grotesque and a victimized white woman. His choice to render fellow champion Naomi Osaka (whose heritage is Japanese and Haitian) as a small, blonde white woman reminded me of another Australian cartoon — this one from 1910. 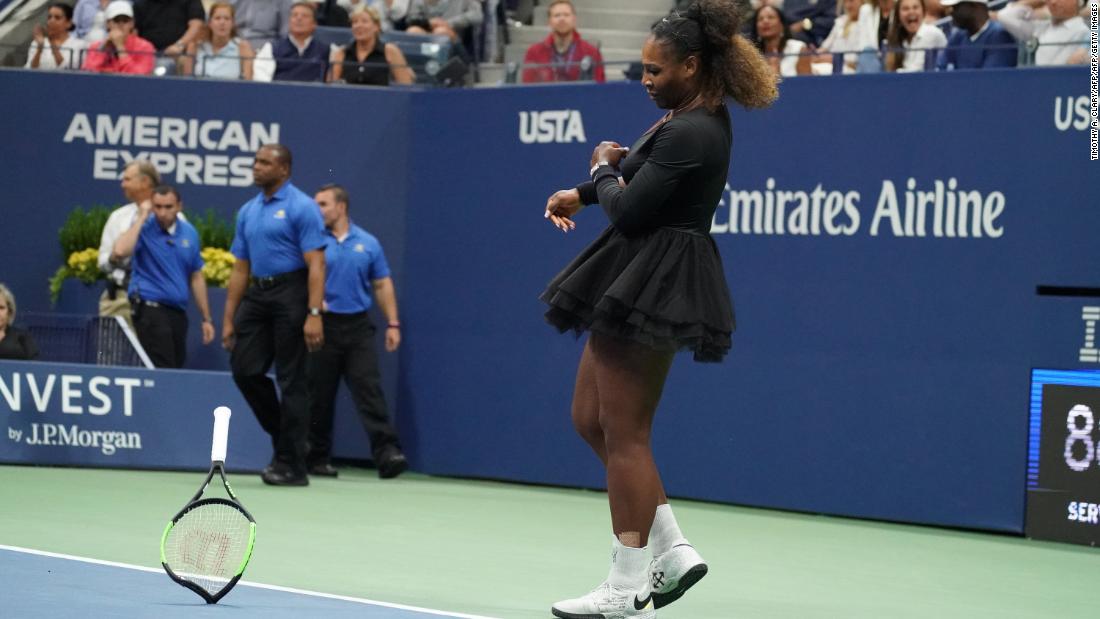 In it, G.H. Dancey depicted the aftermath of a Jack Johnson fight in “Melbourne Punch.” Johnson’s opponent is lying unconscious in the ring, as perfect looking as Greek statuary. Above him, figures with globes for heads labeled “white world” and “black world” stand over him, the white world sorrowful and the black world a Jim Crowish, laughing and dancing figure. Only the shadow of Johnson’s head is visible; the larger-than-life figure is diminished in the cartoon.
Dancey’s image aimed to knock Johnson down a peg; similarly, diminishing Serena Williams is clearly the goal of Knight’s cartoon. Taking people down a notch is often the job of caricature. The field day cartoonists have had with Trump demonstrates that tradition and commitment. But caricatures communicate targets to their audiences. Sometime it is about individuals, and sometimes it is about larger group targets. The structure of the cartoon (the traditional black stereotype combined with the blonde opponent) makes the cartoon about more than Williams. It replicates the same grotesque logic of that Jack Johnson cartoon in which white people are victimized by allegedly monstrous black people.
One of the criticisms of discussions of popular representations today is that political polarization over-determines readings of any image. That is undoubtedly true, to an extent. Progressives often take heat for penalizing speech, but political cartoonists who skewer conservatives can also attest that they have been threatened, penalized, and even fired for their work.
Polarization, political or otherwise, does not mean that we are incapable of constructing rational arguments about why representations work or fail. And in relationship to the art form that he is still fortunate enough to be paid for, Mark Knight participated in the ugly side of the tradition of editorial cartooning. A generous reading could attribute his poor craftsmanship to lack of will or lack of skill.

But for those of us who have spent decades reading social media and commentary suggesting Williams is mannish, non-human, and an unworthy champion, it is not unreasonable to suggest he willfully participated in the nastiest vitriol that we know is not, at heart, only directed at her. For many African-Americans, and African-American women in particular, we know that these images are aimed at all of us.