The Real Santa Claus’ Corpse Is Scattered All Across Europe

The mythical figure of Santa Claus was based on the real historical figure of Saint Nicholas, Bishop of Myra. Some of the “North Pole toy workshop with elf slaves” stuff may have been made up (WATCH AND SUBSCRIBE TO OUR EARTH-SHATTERING VIDEOS AT YOUTUBE.COM/SANTATRUTHERS), but we know the real-life human is buried in Bari, Italy.

But the only reason he’s in Bari is that his body was stolen from its original resting place in Turkey back in 1087. Worse, there’s another abbey that claims to have Saint Nick’s actual body up in Ireland. If that’s true, then Ireland has the bodies of St. Nick AND St. Patrick, thus really cornering the market on saints who inspired holidays with astounding reputations for alcoholism.

And little bits and pieces of the Bari body are apparently scattered all over the rest of the world. It is downright creepy how specific everyone is with their Kris Kringle body parts. France and Germany, for example, both have some of the dude’s teeth. 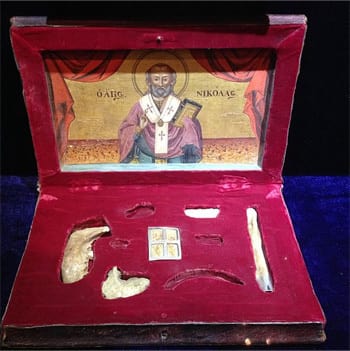 Seven of Santa’s fingers are supposedly floating around out there (possibly touching you right now), and the official website of Saint Nicholas relics claims that several of them are missing. Someone either stole or misplaced SANTA’S DISEMBODIED FINGERS.

There are only two explanations here that make sense: 1) Santa is important to a bunch of different cultures, and thus they all claim to have relics relating to him, or 2) Santa was some sort of unkillable supernatural monster, and the only way they could keep him from reanimating and terrorizing Europe was to spread his body parts around the continent. We know what we choose to believe.

What good is Santa without his Elf on the Shelf?

For more, check out The Dark Truth About Supermarket Orange Juice and Here’s How They Made The ‘Roars’ In The Lion King.