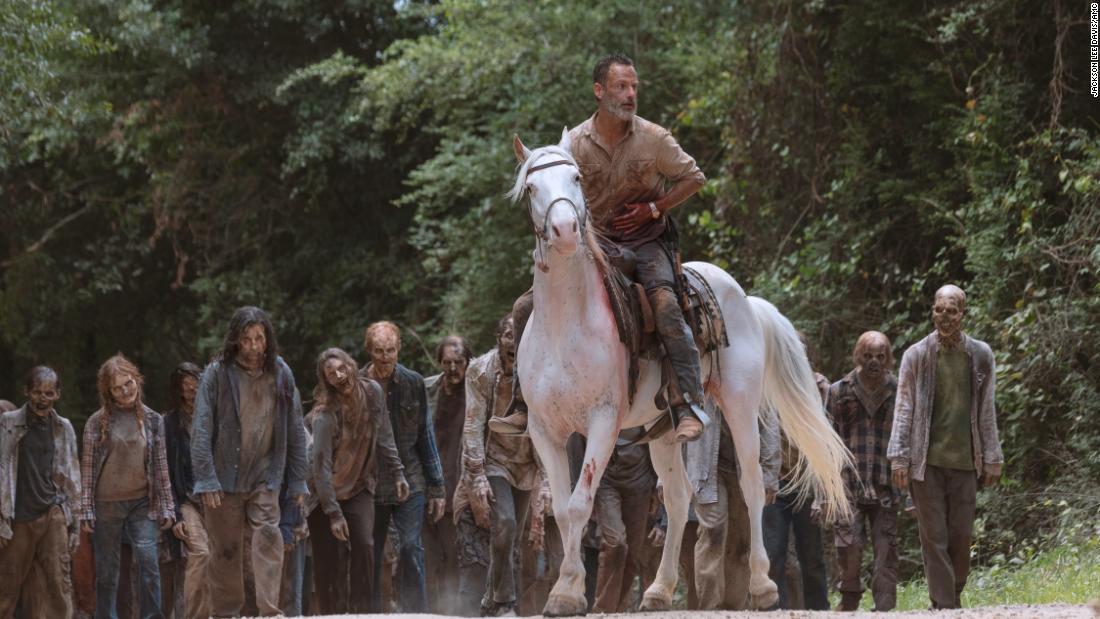 Much of the episode — which picked up with Rick skewered by a metal pole and surrounded by zombies — reached back to the program’s past, a magical mystery tour through its best (and better) days, featuring a number of cameos by since-departed regulars.
There was a good deal of nostalgia in that — seeing Jon Bernthal, Sonequa Martin-Green and especially the late Scott Wilson, who died last month — as Rick kept slipping into what amounted to a walking-dream state. Those interludes clearly represented an effort to serve long-time fans with an hour that lived up to the momentousness of losing the program’s original star.
Still, the writers backed away from a definitive finish after Rick went out in what appeared to be a blaze of glory, setting off an explosion on a bridge filled with walkers. As it turned out, the whole Rick’s exit was a bit of a bait and switch, as AMC promptly announced a planned series of movies featuring Lincoln as the character, essentially asking fans to pay to see what they have grown accustomed to watching for free.
Given all the promotion that preceded what were billed as “Rick Grimes’ final episodes,” it all felt far too cute — another magic trick designed to play with audience expectations that, once again, opened the show to charges of toying with fans’ emotions, much like the old Glenn-under-the-trash-compactor twist of a few years ago.
The other major gamble involved signaling a significant time-jump at the end of the episode, showing Rick’s daughter Judith as a much older kid. AMC actually made the next episode available in advance, providing critics a better sense of the shifted focus in terms of key characters and relationships, in what showrunner Angela Kang has described as the program’s “Rick-less” future.
Any way you slice it, dealing with Rick’s absence is going to leave a sizable void, one that will have to be filled by the likes of Daryl (Norman Reedus), Michonne (Danai Gurira) and Carol (Melissa McBride), among others. While those are formidable anchors — and the series has weathered plenty of turnover in the past — it’s engineering this baton pass from a position of weakness, not strength, with the ratings having fallen sharply over the last two seasons.
To the writing staff’s credit, “The Walking Dead” started the season reasonably well, and managed to give Lincoln what felt like a major sendoff — right up until that cryptic closing sequence — without feeling completely as if they’re writing the show’s epitaph along with it. Airing this episode now also provides a few weeks to establish the time-shift — adding new faces, and solidifying the threat to all that hard-earned harmony — before the series heads into its customary midseason break.
In the past, when actors have left the series — not usually at their request, as was the case with Lincoln — life, and death, have gone on. It’s possible that “Walking Dead” will be able to reload again, but as it ambles further into its ninth season, the future for what was once TV’s biggest hit hasn’t looked this uncertain since Rick first woke from that coma.