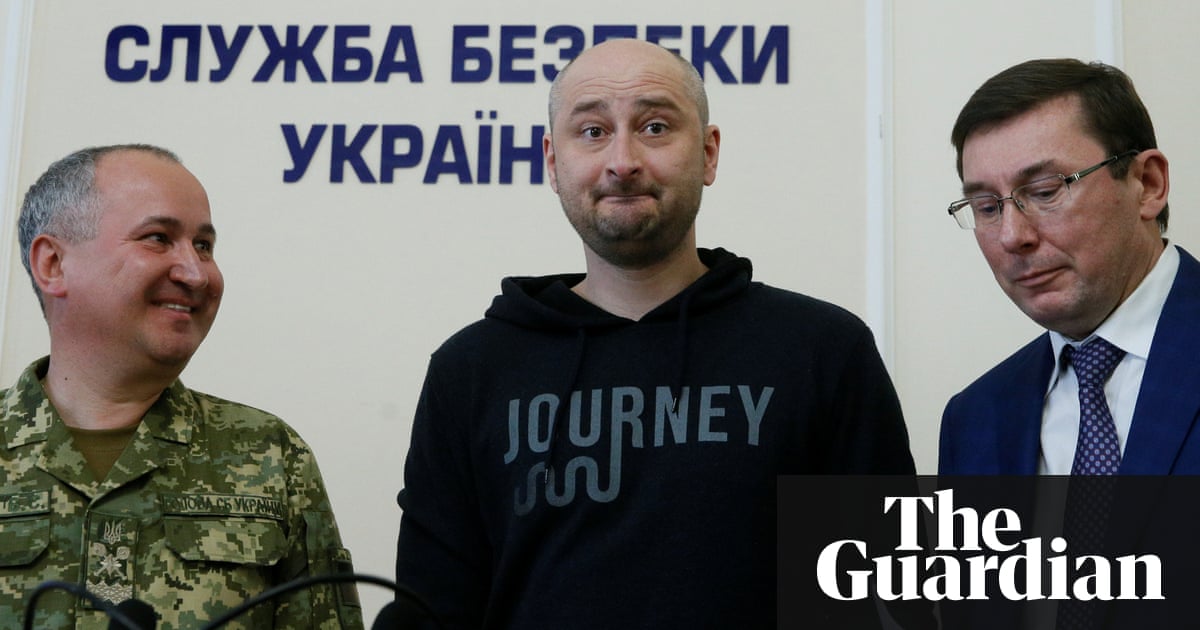 A Russian journalist who was reported to have been shot dead in Kiev has turned up alive at a news conference in Ukraine.

Arkady Babchenko emerged at a police press conference on Wednesday afternoon in front of journalists who had been expecting updates on the investigation into his murder.

Vasily Gritsak, the head of the Ukrainian security service, told reporters the agency had faked Babchenkos death to catch people who were trying to kill him.

On Tuesday, Ukrainian police had said Babchenko, a Kremlin critic and veteran Russian war correspondent, was shot three times in the back as he left his apartment to buy bread. A government official told the media that Babchenko, 41, died in the ambulance on the way to the hospital.

But on Wednesday, officials said Babchenko had staged his death in coordination with Ukrainian police as part of an investigation into threats made against his life. The plan had been in place for more than a month, they said.

Police said they had made one arrest in connection with the operation.

Speaking to journalists, Babchenko apologised, saying: I have been forced to bury my friends and colleagues many times and I know the sickening feeling.

Apparently he had not even told his closest family members about the plan.

Special apologies to my wife, Olechka there was no other option, Babchenko said to a room of visibly stunned journalists. The operation was under preparation for two months.

It was not immediately clear how Babchenko faking his death led to the apprehension of the suspect.

The general prosecutor, Yuriy Lutsenko, who appeared alongside Babchenko, said it had been necessary to fake the journalists death so the organisers of the plot to kill him would believe they had succeeded.

According to Gritsak, Russian authorities had recruited a former fighter in east Ukraine by offering him $30,000 (23,000) for the killing.

Wearing a black hoodie and shuffling slightly as he spoke, Babchenko concluded: Ive done my work. Im still alive for the moment.

Friends had begun planning vigils and fundraising for Babchenkos adopted children before he emerged alive with a sheepish grin on Wednesday. Fellow reporters had begun investigating his death independently of the government.

A journalist asked about the inquiry into the murder of Pavel Sheremet, an investigative journalist killed in a car bombing in 2016. Journalists have accused Ukraines SBU intelligence service of stymieing the investigation. Please, we have a different topic today, the government official responded.

The Russian foreign ministry said on Wednesday it was happy Babchenko had turned out to be alive, but said Ukraine had used his story as propaganda. Maria Zakharova, the foreign ministry spokeswoman, said the story was imbued with propagandistic effect.

Other Russian officials denounced the staged murder. Its a hoax, as well as a provocation, with accusations against Russia of a feigned murder, Alexey Pushkov, a prominent Russian lawmaker, wrote on Twitter.

A number of observers expressed reservations about the extreme measures taken by Ukrainian officials, and whether they could endanger journalists or hinder investigations in the future. Mark Galeotti, a senior researcher at the Institute of International Relations Prague, wrote online: Next time theres some killing, Russia will be able to play the do you know this is real? card.

Some journalists also asked whether police would be required in future to produce a body.

The Committee to Protect Journalists, which had earlier called for an investigation into the killing, demanded on Wednesday that the Ukrainian government explain why it needed to stage Babchenkos murder.

We are relieved that Arkady Babchenko is alive. Ukrainian authorities must disclose what necessitated the extreme measure of staging news of the Russian journalists murder, the organisation wrote in a statement.

Babchenko fled Russia in 2017 after receiving threats at home for saying he did not mourn the victims of a Russian military plane crash.

He served in the Russian army during the two wars in Chechnya in the 1990s and became one of Russias best-known war reporters.

The murders of a number of journalists and other dissidents in recent years in Kiev remain unsolved.