What If Your Job Paid You To Do Absolutely Nothing?

Let’s say your enraged boss drags you into his office and says, “This is the last straw, Bozinski! [Your name is Bozinski] “Your punishment is that you will continue to draw your current salary and benefits, but you will be sent to a room and given no work to do, indefinitely!”

That’s a real thing that happens to actual workers around the world, and whether you would regard that as a vacation or a living hell probably says a lot about your personality. It happens to school teachers, for instance. In some places (like New York), if they’re accused of some kind of misconduct, they’re stuck in an empty room until the process is completed … which usually takes years. Day after day, week after week, they show up and sit at an empty desk, in silence.

We talked to Kelly, a teacher sentenced to one of these rooms for over a year, and found out the whole thing was even crazier in practice.

Yes, You Can Get Paid To Do Nothing (Or Just Sleep)

To be clear, there’s never an actual good reason to do this. In the case of the New York teachers, they could have been given some other task, or simply sent home. But this experience was designed to be torture. Phones were banned. Teachers were allowed laptops, but the room didn’t offer any internet — and once teachers started to steal WiFi from the coffee shop next door, the room put in a rule banning social media. The aim, reasons The New Yorker, was to make things so unbearable that they would get fed up and quit.

Maybe some do quit, giving up their salaries and saving the city a bundle. But if the bureaucrats behind this idea spent as much time in classrooms as teachers themselves do, they’d know what bored people stuck at desks are more likely to try: 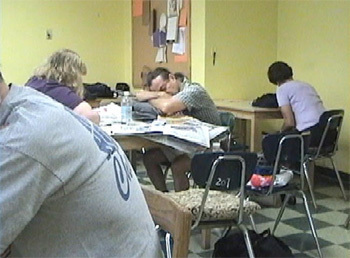 What It's Like When Your Town Is Attacked By A 'Killdozer'

Sleeping right at the desk was standard operating procedure, and some teachers in Kelly’s room got extra creative. They brought in four or five sweaters, chained them into a blanket using the buttons, and then pushed five padded chairs together to make a cot. “It was pretty amazing,” says Kelly, “until the administrators checking in put a stop to it.” In time, sleeping turned into a game, wherein teachers challenged each other to nap in weird and wonderful positions. First under the table, then leaning. Then on your side behind the file cabinet. Then sitting above an open pudding cup, so when you fall forward, your face goes splat.

If this sounds like people gradually losing their minds, well, that’s pretty much what happened.

The popular nickname for reassignment rooms is “rubber rooms.” That’s because life there is like being in the padded cell of an asylum. Teachers went absolutely nuts as time went by, to the point where Kelly feared their actions might be used against them once their cases finally came up for review.

Fights nearly broke out, she says. Shouting was common. Boredom absolutely ravaged them. The woman who sat beside Kelly marked time by writing down a long series of numbers, one for each minute of the day. After a bathroom break, she’d say, “That’s five minutes off!” and cross off the five highest numbers. She’d do a few sets of push-ups and cross out the next ten. “And then,” says Kelly, “she would stare at the clock sometimes and cross off a number after each minute. She would look at the clock, wait a minute just to cross the next minute off. And she had a binder full of these.”

One teacher in Kelly’s room managed to get online, and he signed up for a Facebook profile under the name of one his students. He added a bunch of other students as friends and then … spammed them all with game invites. Specifically, he sent requests about a vampires vs. werewolves game, because the kid he was impersonating liked Twilight. When students realized the account was fake, he impersonated a different kid. “Then when he got bored of that, he would change Wikipedia articles to be factually wrong.”

Some teachers brought in musical instruments, and every time an employee of the building appeared, they’d bang out “The Imperial March” from Star Wars. Another teacher brought in a bunch of ingredients and mixed blueberry muffins at her desk, cooking the batter under a light bulb. This same woman used aluminum foil to build a solar cooker to grill hot dogs. With her, says Kelly, there was method to the madness. She wanted to be so annoying that the administrators would fast-track her case to get her out of there. “Which I’m all for,” says Kelly, “but the rest of us thought that pissing them off before review was not the best plan.”

Others Tried To Make The Best Of It

So The Room Where You Do Nothing was in many ways the sort of place Kafka would dream up. But to a certain kind of person, it was a pretty sweet gig. Some of the people sent to reassignment rooms had been teaching for decades and had been looking forward to retiring. In the reassignment room, they got a chance at the very sort of things they’d be doing all day during retirement — except they’d get paid for it.

“Cards were big,” says Kelly. “Sewing and macrame were big … We exercised. We read.”

A guy in the room was a big Tom Clancy fan. He used his term in limbo as an opportunity to write out webs of character lists and fan theories. He’d always wanted the time to do this, says Kelly, and now time was all he had. Another teacher was really into Lost. “She would print out character photos the night before and make double-stick tape trading cards out of index cards. She said she had the time of her life.”

Other teachers got smart and used the time to train for a new career, hopefully one that wouldn’t slowly drive them to madness in a boredom dungeon. They took classes, either at night or online, and while they were in the rubber room, they’d do their homework. “It was like going to school on scholarship.” One teacher Kelly knew got most of the way toward her master’s while still in the room.

Yeah, some teachers spent a long time in the reassignment room. Years went by as they waited for the DOE’s handful of arbitrators to get through their massive backlogs. The average stint in the rooms was three years. Some teachers did as many as 12.

There Are Old-Timers To Show You The Ropes, Kind Of Like In Prison Movies

“What are you in for?” one teacher might say to another. Kelly says she’d been falsely accused of helping kids cheat. Other teachers are sent away for really serious stuff, like hitting kids and sexual misconduct. And yet it seemed like every single inmate could explain away their accusation as some crazy misunderstanding, from the teacher sanctioned for teaching in an “unorthodox way” (no elaboration provided) to the guy who swore he’d been in the girls’ bathroom only because it was so much cleaner and quieter than the staff one.

But if movies have taught us anything about prison, it’s that every jail sentence comes with a grizzled but kindly mentor who will teach you what’s what. Kelly called these people “the old guard.” When she first showed up, she didn’t even know how she’d manage to pull off that most basic of rubber room activities — sleeping — because the room banned pillows (along with mattresses and beach chairs). But then a long-timer said, “There’s no rule against bringing sweatshirts from home inside your purse for a makeshift pillow.” Armed with this advice, Kelly spent many a peaceful hour asleep, her sweater stuffed under her head and her jacket draped over her.

This member of the old guard had been there five years. She knew which guards (sorry, we mean “building employees”) would let you leave the room to make an emergency phone call, which ones would never let you out period, and which would probably briefly let you out just whenever. She had the supervisors’ annual schedules memorized. Other old-timers were so in tune with the day’s routine that it was fascinating to watch them. One crafted an elaborate fitness regimen that lasted for hours, with a built-in break for when lunch began and a wrap-up exactly 15 minutes before the school day ended.

Kelly was released from the rubber room after one year and two weeks, so she never joined the old guard herself. And then the old-timers were all released as well, because in 2010, news of the rubber rooms finally came to light thanks to a documentary and several news stories. The public was outraged over the $65 million that went annually to these teachers who didn’t teach, and the backlash led New York to announce they were closing all the rooms.

Though the rooms returned years later in some form, New York mostly moved to making these teachers do administrative jobs rather than sticking them in detention. Reading and sleeping, of course, had been a lot less work than filing papers in some broom closet. But that’s exactly what makes rubber rooms so awful to be in, says Kelly. “It may sound great, but don’t be fooled,” she says. “It’s kind of fun for the first week or two, because you can get organized, look up everything on the web, play games. But that soon becomes nothing. You want a job. You want to do something meaningful.” Because while there are plenty of people out there happy to do nothing so long as they have money, very few of them choose to become teachers.

Evan V. Symon is a journalist and interview finder guy for the Personal Experiences section at Cracked. Have an awesome job or experience you’d like to see in an article? Then post us up here or here!

Teaching is difficult, consider getting your child’s teacher some tissues or other classroom supplies, just to help.

For more, check out 4 ‘Slacker’ Jobs That Actually Pay Amazingly Well and 5 Corrupt Workers Who Liked Getting Paid But Not Working.