When is a dance not a dance? When its a geopolitical move by Putin | Natalie Nougayrde

The waltz with Austrias foreign minister was more than a PR stunt: it was a dagger in the heart of European liberal values, says Guardian columnist Natalie Nougayrde 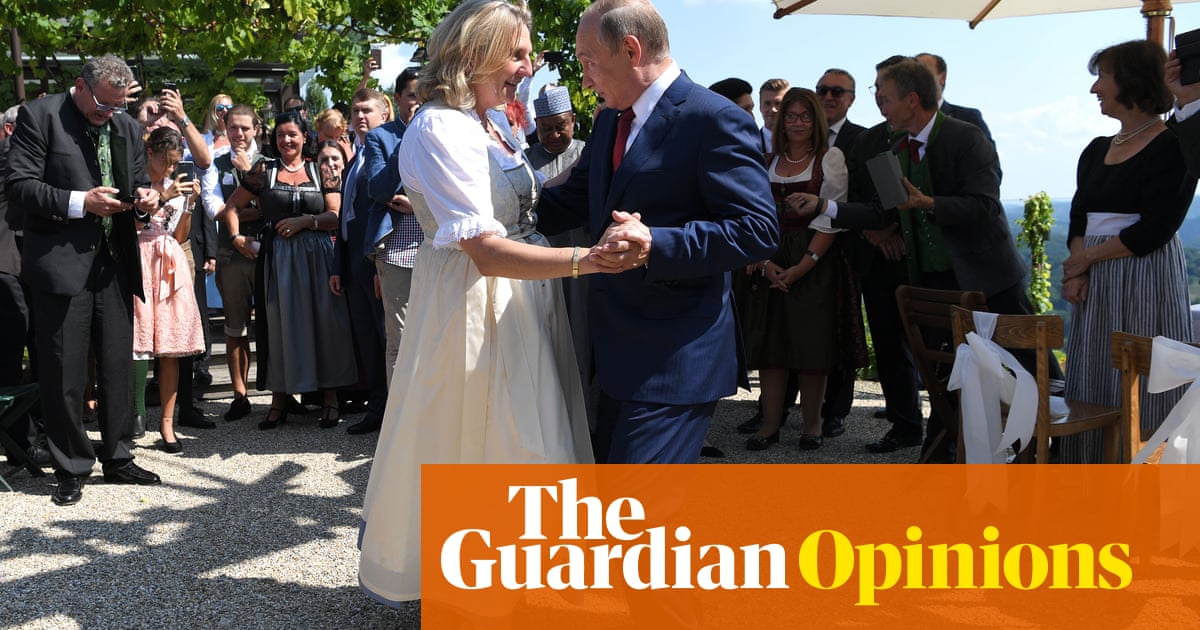 When Vladimir Putin took to the dancefloor to waltz with Austrias foreign minister, Karin Kneissl, at her wedding last weekend, perhaps he wanted to send a signal that it was Europe he wanted to dance with. But which Europe? Surely not the Europe of the Enlightenment, embodied today by liberal democrats struggling to counter the populist wave. Rather a darker, more sinister side of Europes history and current politics.

Among the many wedding moments that drew disapproving comment on social media, the most significant was arguably when Kneissl curtsied to Putin, her head bowed, an image not unlike those of ancient Russian paintings where boyars pay homage to the tsar. But to me, something much more sinister was at play. Kneissl was appointed foreign minister last year thanks to the support of Austrias far-right Freedom party, which as part of the governing coalition, now also controls the defence and home affairs ministries.

Putin knew exactly how this wedding scene would play to his critics in the west. Plunging into an icy lake, pushing someone over on a judo carpet, or showcasing new weaponry, are more his thing than dancing. So it came as a surprise that the macho symbolism of his presidency suddenly came accompanied by the gentle shifting of feet to the tune of a romantic song in an Austrian vineyard. But Putin well understands how images can create a new reality. His turn on the dancefloor will have been carefully thought through.

Thats because it had less to do with celebrating newly wed love than it did with sticking it to liberal Europeans, not least Angela Merkel (who Putin visited next), and delivering a blow to Europes values and political architecture. That Austrias current government played along with it speaks volumes about what their interlocutors in Paris, Berlin and Brussels now have to wake up to. With the far-right Freedom party in government, Austria is fast turning into a Putinist Trojan horse at the heart of Europe.

Consider who else embraced Putin at the wedding: the Austrian chancellor Sebastian Kurz, a man who just in January had assured Emmanuel Macron that his policies would be resolutely pro-European. And in the background was Heinz-Christian Strache, vice-chancellor and the leader of Austrias far-right party, a politician whose neo-Nazi past has been well documented.

Putins Russia has long established itself as a supporter of extremist rightwing groups across Europe. But here was the Russian president basking in family-like joy among far-right people who hold key positions in a European government: that was a first. Is Italys vice premier, Matteo Salvini, also from the far right, next on Putins dance card?

Putins Austrian waltz was much more than a PR stunt to show he has friends in the west, despite Russia being accused over nerve agent poisonings and other behaviours. What he succeeded in doing is personally signalling, with a toast in fluent German, his capacity to disrupt Europes ambition to put the wind back in its sails, as EU leaders had proclaimed last year.

But Id argue the worst part about that summertime Austrian waltz was to render Europes lessons from the past almost obsolete. If post-1945 Europe must stand for anything, it is surely that a blind eye can never be turned to mass atrocities, the crushing of human dignity, nor to the responsibilities of those who perpetuate such crimes.

It is no light matter that an Austrian foreign minister, whose country currently holds the rotating EU presidency, bowed to Putin precisely at a time when hes trying to get the west to endorse Russian policies in Syria ones that have, since 2011, contributed to half a million deaths. Also troublesome is that this happened just as European calls for the release of the hunger-striking dissident Oleg Sentsov, detained in Russia, and whose life hangs by a thread, continue to be ignored.

But there was more to it than just insulting European critics. Putin is laying out his strategy. Hes showcasing how much hed like to see ultra-conservative, Christian, anti-immigration, illiberal political forces overwhelm Europes politics because thats how he believes Russia can best attain its strategic goals of carving out a sphere of influence. Because Kneissl, Salvini and others are in power, this was much more than just sipping tea with Marine Le Pen in the Kremlin when she was running for president.

When you add it all up a very disturbing element creeps into those wedding pictures and it has to do with the dark, long shadow of the 1939 Soviet-Nazi Pact. Whatever its tactical reasons, that agreement was in the end a strategic decision that left liberal democracies entirely exposed and led to untold horrors in Europe.

Of course, the Putin-Kneissl dance is not the same. But heres why I see worrying echoes: Russias Kremlin-connected United Russia party has a formal agreement with the Austrian far-right. Unlike postwar Germany, Austria never fully came to terms with its pro-Nazi past. Post-1945 Austria got off lightly, astonishingly so as the historian Tony Judt put it. In todays world there is abundant proof of how fundamental values, not least those of never again, have come under assault. Kneissl may have been oblivious to that backdrop, which is worrying enough it itself. But Putin, who has in the past justified the 1939 pact, has few historical qualms about helping Nazi sympathisers or their distant followers as long as it serves his dividing tactics in Europe.

Every gesture matters, every word counts. And this wedding was loaded with symbolism. It is reassuring that the Putin-Kneissl dance has triggered a fair amount of outrage, not least from Austrias opposition: it stuck a dagger at Europes interests and founding principles.

Natalie Nougayrde is a Guardian columnist