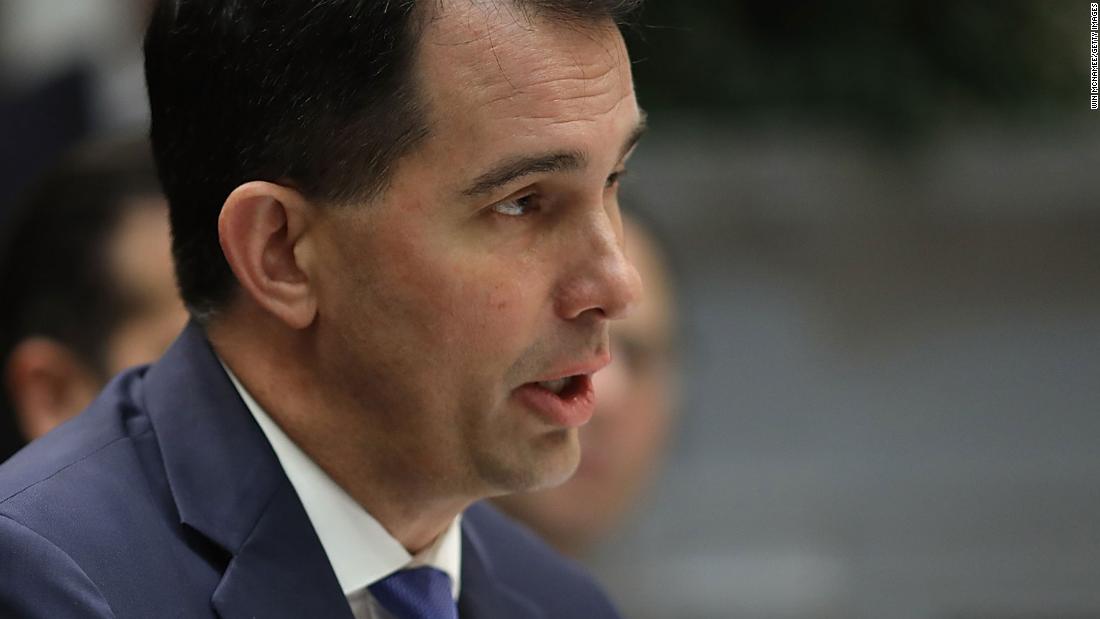 (CNN)Republicans in Wisconsin and Michigan were wiped out of their states’ top offices in November. But before Democrats can take their place next year, GOP lawmakers in both states are moving to strip the incoming leaders of key powers.

Wisconsin’s Republican-led Assembly and Senate passed two of the measures they are considering, Britt Cudaback, spokesman for the governor-elect, told CNN Wednesday morning. Both bills will now go to Gov. Scott Walker for his consideration.
One of the bills would require permission from the state legislature before the state’s executive branch could make waivers or changes to public assistance programs, including work- and drug-testing requirements for “able-bodied” adults.
If the lame-duck governor signs those bills and others still under debate, the state could reduce its number of early voting days, restrict gubernatorial appointments to a powerful economic agency and require legislative backing for certain decisions traditionally made by the attorney general and governor — a move that would likely block Kaul from withdrawing the state from a federal lawsuit against Obamacare.
Both Evers and Kaul slammed their Republican opponents over health care issues during the campaign, in particular the state’s participation in that legal challenge, which would end coverage protections for people with pre-existing medical conditions. Walker had promised to call a special legislative session to reimplement the rule on a statewide level, but questions lingered over how robust those new protections would be and the Democrats have credited their strong midterm showing in large part to the party’s health care pledges.
Wisconsin Republicans are pulling from a playbook popularized in North Carolina two years ago, when Republicans in the Legislature responded to GOP Gov. Pat McCrory’s defeat by taking action — after the election but before his replacement could be sworn in — to reduce incoming Democratic Gov. Roy Cooper’s appointees and require his Cabinet picks to be confirmed by lawmakers.
The American Civil Liberties Union excoriated North Carolina Republicans at the time, calling their actions then “a shameful partisan trick.” But the lawmakers ignored the backlash and McCrory signed off on a plan to curtail his successor’s authorities, setting a precedent for Midwestern Republicans, who suffered heavy defeats in 2018.
Divided along party lines, the GOP-run state budget committee in Wisconsin acted overnight to advance many of the controversial measures after less than 12 hours of debate and amid growing protests in and around the Capitol in Madison. But a proposal to decouple the state’s 2020 presidential primary, which is expected to draw heavy Democratic turnout, from a state Supreme Court vote in which a conservative justice is up for re-election now seems unlikely to pass.
Before the committee vote, Evers, in prepared testimony, called the legislation and the process behind it “unfettered attempts to override and ignore what the people of Wisconsin asked for this November.”
“This is rancor and politics as usual,” Evers said. “It flies in the face of democratic institutions and the checks and balances that are intended to prevent power-hungry politicians from clinging to control when they do not get their way.”
Walker denied on Monday that the moves were a partisan power grab.
“Much of what we did over the last eight years is work with the Legislature,” he told reporters, “not at odds with the Legislature.”
But both the State Assembly and Senate are controlled by Republican allies of Walker, and have pursued the same political agenda during a near-decade-long period of almost unbroken one-party rule.
State Senate Majority Leader Scott Fitzgerald has been more open about the partisan machinations in play.
“I don’t have any problem highlighting that right now,” Fitzgerald said on Monday. “I want people to understand that. That there’s going to be a divide between the legislative and executive branch.”
In a statement Tuesday, Democratic Legislative Campaign Committee Executive Director Jessica Post called the GOP lawmakers’ actions “shameful.”
“Just because Republicans in Wisconsin and Michigan don’t like the outcome of the election does not give them (the) right to put power over people and disregard the will of the voters,” Post said. “After years of voter suppression laws enacted by Republican legislators who were elected on their own gerrymandered lines, this partisan gamesmanship has reached a new low.”
Republicans in Michigan are also using a lame-duck session to rewrite the rules for incoming Democratic leaders.
Gov.-elect Gretchen Whitmer, along with future Secretary of State Jocelyn Benson and Attorney General Dana Nessel, all won last month, marking the first time in nearly 30 years Democrats would hold all three offices.
But the GOP still controls the Legislature and is considering maneuvers to consolidate its power.
If those plans go forward, Republicans could step in to defend a law that would allow religious groups to refuse to place children up for adoption with same-sex couples. Nessel has suggested she might not continue the state’s efforts backing it in court. Republicans are also seeking to remove campaign finance oversight powers from the secretary of state’s office and place the work under the purview of a new, bipartisan commission.